Harry Potter in the fMRI Machine 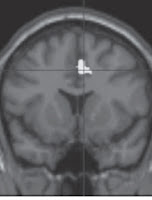 How do readers immerse themselves in thrilling passages of novels and short stories? Some principles are clear. First the writer depicts a protagonist whom readers like. Next, usually by the agency of an antagonist, the protagonist is put in danger. The reader experiences empathetic fear on behalf of the protagonist, and reads on to see how he or she will fare. In cognitive studies of literature, this experience of becoming engaged in a story is called immersion, or becoming lost in a book.

In a study of the brain regions involved in thrill-based immersion, Chen-Ting Hsu, Markus Conrad, and Arthur Jacobs, of the Free University of Berlin, had people in a functional Magnetic Resonance Imaging  (fMRI) machine read brief passages (each four lines long) selected from Harry Potter books to be either fear inducing or neutral and, after each passage had been read, they collected ratings of how the participants felt during reading. Participants had to have read at least one Harry Potter book previously, to take part in the experiment.

The researchers found that immersion was significantly higher for the fear inducing passages than for the neutral passages, and that the main area of activation in the brain was the mid-cingulate cortex. It has been proposed that this region is associated with empathy for personal distress. In the fear-inducing passages used in this study, rather than emotions being labelled there was an emphasis on actions associated with these emotions. Emphasis on action-based aspects was thought to be important in engaging the readers, and it connects with the hypothesized function of the mid-cingulate cortex in motor rather than sensory processes.

The induction of empathetic fear in readers isn’t the only process by which readers become engaged in stories but the fact that the thriller genre has become popular indicates that for many it is a significant one. For immersion to occur it seems important for readers to experience emotions, not the emotions of the characters but their own emotions, perhaps empathetically, and by imagined actions, in the circumstances that protagonists enter.

Image: Activation of mid-cingulate cortex during reading of fear-inducing passages in Fig 1b of Hsu et al.’s study.