Research Bulletin: Science Fiction and Enjoying the Company of Robots 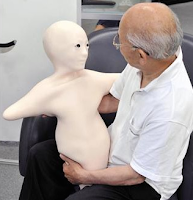 Science fiction transports readers into a realm similar to reality, but dominated by imaginary futuristic technology. The characters in this genre often include robots as well as people, and many of these robots are strikingly similar to humans. Soon, they won’t only exist in these stories. As technology becomes more advanced, scientists are creating robots that are increasingly life-like. Not quite humans, yet not what’s expected when you think of robots, they make people feel strange and ill at ease, an occurrence termed the “uncanny valley”.

Researchers Martina Mara and Markus Appel of the University of Koblenz-Landau in Germany conducted a field study to see if reading a science fiction story about robots could create a bridge across the “uncanny valley,” helping people be more accepting of robots. At the Austrian technology museum “Ars Electronica Center,” 72 participants interacted for the first time with a human-like, puppet-sized robot named “Telenoid.” Telenoid is capable of transmitting the voice, facial expressions and gestures of its human operator.

Participants who had read the story about Telenoid saw the robot as more human-like and felt more comfortable with it. They also saw Telenoid as more appealing and thought more positively of it, compared to those who read only facts or nothing at all. Those who read facts about Telenoid or nothing at all tended to feel that the experience was more eerie and had more ill thoughts toward the robot. Reading a story about Telenoid appeared to help participants place it in a context, adjust their understanding, and prepare them for their interaction with the robot.

People may begin to feel uneasy as technology advances and introduces strange humanoid machines into our lives. It seems that fictional stories can help to decrease these feelings by adjusting readers to these new technologies, in a sense helping readers cross the “uncanny valley” and feel more comfortable around robots.

Posted by Raymond A. Mar at 07:00
Labels: Effects of fiction, Imagination, Research Bulletins

Intriguing.I believe that robots will dependably do what they are programmed to do and nothing else so the length of a person does not program the robot to kill but rather programs the robot to take after requests everybody will be fine.The 3 laws are a decent first step.