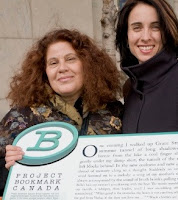 A lovely idea of Miranda Hill was to start and continue to administer Project Bookmark Canada. (We had a Quick Hit on the Project in April last year, click here.) Each bookmark is a plaque on a sturdy metal post set into the sidewalk at a particular place. The first Bookmark was to Michael Ondaatje. It’s on the Bloor-Danforth Viaduct in Toronto. Ondaatje wrote about the viaduct in his novel, In the skin of a lion, which is about about workers involved in the building of the city. There are bookmarks across Canada, from Vancouver in British Columbia to Woody Point in Newfoundland.

When I am out walking and I see a plaque, I stop and read it. In London, England, I like the many blue plaques on the sides of houses. They began to be set up by the Society of Arts. Then the scheme was taken over by the London County Council, and more recently by English Heritage.

If I move to a new place, even for a short time, I feel at first without bearings. To combat this disorientation I read writings of people who lived there, and plaques are wonderfully helpful. When I lived near South End Green in Hampstead, London, for three months, I saw a plaque to George Orwell on a building at the corner of Pond Street and South End Road. The place is now a café, Le Pain Quotidien. It used to be the second-hand bookshop, Booklovers’ Corner, in which Orwell worked during the afternoons for 15 months. The job allowed him time to write in the mornings. A short walk away, at 77 Parliament Hill, on the edge of the Heath, is a house in which he had rented a furnished room. It has a plaque put up by the Hampstead Plaque Fund. The book Orwell was writing when he worked at the bookshop was Keep the aspidistra flying. I hadn't read it, so then I did. I went to look at 31 Willow Road, not far away, which I imagined to be 31 Willowbed Road, the house in which Orwell has this novel’s protagonist, Gordon Comstock, rent a room. Comstock works in a bookshop in the afternoons, so that, like Orwell, he can write in the mornings. The novel helped give me a sense of that place.

To track down what Orwell had been writing when he worked at South End Green, I had to do a bit of research. I didn't mind doing that, but a very good idea for the Canadian plaques, which can give a start to one's research, is not just to give the name and dates of an author, but to have some 500 words of a piece of poetry or fiction that relate to the spot where the plaque is set up. I feel very pleased to have been present at the unveiling of the Bookmark at the corner of College Street and Manning Street, in Toronto, which bears a passage from Anne Michaels’s book Fugitive Pieces. Here is part of the passage that the plaque bears.

Up Grace, along Henderson, up Manning to Harbord I whimpered; my spirit shape finally in familiar clothes and, with abandon, flinging its arms the stars.

But the street wasn’t empty as I thought. Startled, I saw that the blackness was perforated with dozens of faces. A forest of eyes, of Italian and Portuguese and Greek ears; whole families sitting silently on lawnchairs and front steps On dark verandahs, a huge invisible audience, cooling down from their small hot houses, the lights off to keep away the bugs.

Image: Anne Michaels on the left and Miranda Hill on the right, at the unveiling of the Bookmark at College Street and Manning Street in Toronto.