Orientation and Hospitality: On Celebrations of Place and Time (7th Anniversary Post) 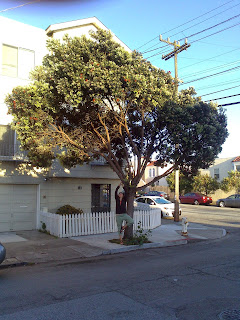 What prompts the scripts that propel us into action? What is disorienting enough to stop us in our tracks?

Today marks OnFiction's seventh year, and the occasion of an anniversary (and a significant one -- will we itch to do something else now?) and also of my return home after a half year away gives me an opportunity to think about functions of the celebration of time and place.

Spending several months in a small foreign city where people mostly speak your language -- just more quietly -- is an excellent exercise in attuning to cues around you. And returning to one's home country -- cacophonous and loud with an overwhelming array of familiar cues makes one grasp for prioritizing tools to decide: what requires action?

I returned from my time in Aotearoa New Zealand via San Francisco, which, it turns out, shares a remarkable array of vegetation. Many plants were introduced to both places from South Africa, and in the beach neighborhood where I was staying with family, my favorite pohutukawa trees were everywhere, as pictured above (and here, in Gisborne, for contrast, and for the context of my tree posture). They were even blooming, throwing me even more completely into seasonal disorientation.

The pohutukawa is widely considered the Christmas tree of New Zealand, largely because its large red blossoms are most fully out around Christmas, the height of summer in the Southern hemisphere. As if it was not difficult enough to make a graceful transition from the starting up of the autumn term in Otago to the wrapping up of the spring term back in the U.S., Christmas trees that had really only just stopped flowering in the late summer of our very southerly latitude (where the trees are really not quite out by Christmas) were popping out in the sunny California April.

Vegetation is always a force to be reckoned with, setting up association-filled backgrounds that are easy to underappreciate -- and the commanding nature of American spoken language is also a predictable attentional force to be reckoned with. Perhaps more surprising than these were the stars. Looking out over the Pacific when the sun went down over San Francisco, the beach seemed familiar -- but I found myself suddenly gripped with the realization that I would not be able to see southern hemisphere constellations! What was surprising about this reaction is the fact that I can barely recognize any of these constellations, making my attachment to them either purely nominal -- or based on an attachment to place details even more subtle than vegetation-noticing.

Over the next few weeks, I will be further exploring the idea of orientation, and how orientation can be provided through bodies of knowledge codified under the rules of hospitality (or, perhaps more abstractly, specific forms of discourse). Celebrations of time and place provide a profoundly useful starting place, because they feature qualities of orientation -- reminders of the past ways people have interacted with a place and each other, and often re-enactments of how this has taken place and changed form over time, along with celebrations of hopes for future plans in place and in the context of the continuity of community time. Reverse engineering the hospitality of celebrations may also suggest some of the common features of disorientation. Expecting a marginal view of those few constellations I can pick out from the far south, I am thrown off by the realization that my view has shifted (even if it has shifted back to a much more familiar view, this is the disoriented reaction that precedes the slower working out of how stars relate as they appear in the Pacific gloaming). Accustomed to quiet conversation, I am jolted by a thousand conversations that seem to be spoken as if I should be hearing them. A week later, I am re-oriented, having picked back up on the habits appropriate to familiar cues -- but I am also intrigued by that liminal space where habits can be seen unhabitually, and wonder how much that, too, is what we celebrate in the spectacle of things like anniversary?