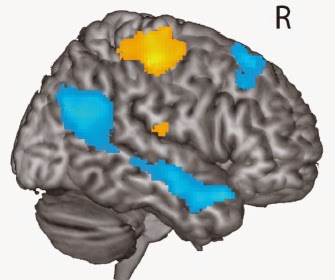 It has been found that at least two kinds of brain networks are involved when people read or listen to literary fiction. One network, which includes the anterior medial prefrontal cortex and the right temporo-parietal junction is called the mentalizing network. It is concerned with understanding other people, that is to say with theory-of-mind. Another area, which includes the motor cortex, is concerned with action.

The researchers asked 18 people to lie in an fMRI machine while they listened to excerpts from three literary novels. The excerpts were scored for mentalizing content, that is to say for thoughts and beliefs of characters, and for action content, depictions of what characters did.

Nijhof and Willems say that their study provides evidence of two qualitatively different styles of entering the simulated worlds of fiction. They say that: “Participants could be placed on a continuum of how much they relied on mentalizing or motor simulation while listening to literary fiction stories” (p. 12). They say, also, that these may not be the only two modes of literary engagement. They propose that this kind of study shows the value of neuro-imaging in our growing empirical understanding of how people immerse themselves in fiction.

Image: part of Nijhof & Willems’s Figure 1, showing areas of the right cortex including the  distributed mentalizing network in blue, and the more localized action network in yellow.