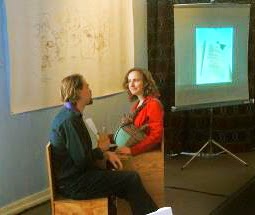 Maja: I saw a movie – ‘Griefwalker’ – it reminded me how when we love, we have to love love’s death too – because it’s a part of the whole cycle of love.
Valentine: Loving love's death seems important.  I'm almost tempted by this to take a break from my food epistemologies mapping to investigate this... it's like a return to the pre-blog days when these missives were conversations emailed between the authors.
Maja: Give in to your temptation - I'd love to see what you would write on loving love's death.

Valentine: So it seems like there are three common themes when one starts to pay close attention to the way people grapple with the idea of the death of love, and each has different implications for the way we can see love functioning, perhaps. Perhaps most trivially -- but not uncommonly -- people are unwilling to let go of attachment to love, and when love dies, either the love itself, or the object of the love (or perhaps the infatuation stage of love -- the challenge presented when uncertain love threatens to be supplanted by a fantasy version of what love ought to be), they replace it with a proxy. (I'm currently watching the French film The Son, which deals with this very starkly, both in terms of its costs, but also what can be gained by remaining openly attentive to the inexplicable needs and forces of dealing with grief in love.)

A second theme seems to have to do with the way that a death of love is often narrated to justify the strength of a new infatuation: the old love must have died, and this effect of strong novelty must be what live love feels like. This seems like one of the most corrosive features of infidelity, as it contributes to an assertion of death for what is more likely a transient contrast effect -- and is exacerbated by the self-deception and cognitive dissonance reduction likely to along with it.

Third is something slightly different related to an awareness of contingency in general, as when, for example, lovers are of significantly different ages to not be able to ignore the possibilities of death itself (and the recognition of its omnipresent possibility, not just there as something we age into) or of the challenges of love in aging differently. It strikes me that there is a healthy tonic to the other two themes above, which both involve some degree of self-deception, in this openness to difficult experience, and I suspect that it is easier for people who are less disgust sensitive -- but also that it helps people develop more comfort with the challenges presented by uncertainty and disgust; it brings the unknown more actively into the experience of love, and in embracing death's presence there, makes it less corrosive.

It would be interesting to know how these three themes factor into the gracefulness of transitions in relationships. One trope that seems worth noting, partly because it seems like such a common attractor state in the conceptualizing of love transitions is a kind of catastrophizing that paints painful experience of love changing state in a tint of noble suffering. The feeling of needing to give up love for some sort of character development seems likely to be unhealthily influenced by normative social ideals -- and yet also to offer a tantalizing sense of control in a relational domain so characterized by uncertainty. In contrast, the willingness to observe more openly what love becomes over time -- as it may decompose and reconstitute in various ways -- seems more likely to nourish romantic love in all its threatening realness.