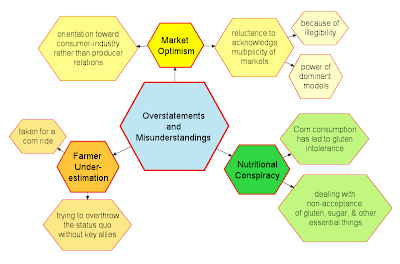 One of the both ever-interesting and somewhat unfortunate things about studying something as commonplace as the way that people narrate their experience of food politics is that I often get trapped in conversations that lurk uneasily on the brink between being very compelling research opportunities and rather awkward social interactions. Something like this must happen to the rest of you, and I’m curious about the ways you handle that fascinating moment perched on the edge of a discourse abyss: in the study of the social organization of food systems, we tend to think of this as the moment where potentially useful social organizing narratives go to die in the graveyard of slightly misguided if well intentioned truisms about food (often tending toward bogus food claims bordering on the egregious, such as the claims that oilseeds used for industry must inherently be unfit to eat), or foodie overshare (#twittermyamazingsandwich!), or just food randomness, moving away from whatever had become too uncomfortable to talk about toward the mundane. A hearty and extended conversation about oatmeal this weekend* pushed me back over my threshold toward thinking about what happens when people resort to staunchly fictive positions to defend their various optimisms and pessimisms about food stories in ways that prevent the very exploration they seem to invite!

Overstatements and misunderstandings seem rife in food discourse at this moment, when people are upset about qualities of food production that they don’t like, or riled up about food production or food activism they don’t like or don’t understand. Three incidents over the past few weeks—starting in very different ways, but ending with a characteristic fictive pattern—have left me grasping at narrative patterns I will try to tease out here.

The diagram points to these three conversations: the nutritional ones might be the conversations you’re most familiar with, where food industry skeptics make big claims requiring large leaps, in this case resting the blame for increased gluten intolerance with the hegemony of corn. And while I’m probably unusually sympathetic to critiques of particular emphases in plant breeding as a potential exacerbator of problems with wheat gluten, I cannot help my dismay at the smug certainty with which this kind of “operator” game factoid tends to be delivered. I know how much food knowledge comes to us in these rule-of-thumb, somebody-told-somebody-told-me kinds of ways, and I am morbidly fascinated with crowdsourced wisdom with all its resiliencies and idiosyncrasies. But when I hear food industry supporters emphatically dismiss critics by equating concerns about gluten, or sugar, with completely irrational aversions to essential nutrients (as I did hear this week), I feel compelled to poke a bit at the just so storytelling that brings us so much of our food knowledge. And this provokes discomfort.

Working counterclockwise around my sketch above, I’ll move on to the other thing I hear a LOT these days about corn, about how farmers only grow it because of government subsidies. This usually follows relatively reasonable critiques of the ubiquity of processed corn and dubious healthfulness of the foods that contain it (for full disclosure, I should acknowledge that I just snacked on corn chips with salsa filled with frozen corn, although having acknowledged that, I may also need to own up to the ambivalence manifested there, too, as both corn products were organic, sidestepping some of the thorny issues, if acknowledging a range of different potentialities wrapped up in the so often dismissively used label “processed” food, e.g. in the freezing or frying of corn as opposed to its being transmogrified into cola or chicken). Perhaps the nuance with which the plot of processing is relayed might predict the explanatory exploration a food storyteller will tolerate around the question of why farmers grow corn. Assumptions that farmers are being hoodwinked usually leave me frustratingly tongue-tied; farming is complex and does not make people stupid.

Further, this second kind of conversation often is organized around a realization of the need to take back food politics—but as if this needs to be done behind farmers’ backs, and not as if it might be useful to find allegiances and common ground. Perhaps, like my food-processing-complexity litmus test, I might be able to detect correlations between the amount of plot twist someone might tolerate and the likelihood that a person is interested to hear that many farmers think they might be dependent on mainstream crops like corn and soy even if they were not subsidized, as in U.S. agricultural policy, because of the way that these crops have been extensively bred to tolerate a very wide range of growing conditions.

I recognize that getting so complex with the characters in these food stories may require building more familiar plotlines for people to play with—plots that extend, for example, beyond the market optimism that marks the last point in my triad of likely indicators of a food conversation about to derail. It may be difficult to find people who have not succumbed to the attractive logic of “voting with one’s fork,” and I do not purport to try to dismantle the logic of consumer activism story (even if I cannot end that sentence without a reminder of the at least nominal power of voting with, ahem, votes). But with market optimism, I have found, both this week and over the last year that I have been mulling the question of how people tell food stories, cracks in the veneer of market logic ideology that respond well to the participatory sport of interactive narrative building.

In a remarkably unheated debate about whether industry-oriented academics had effective skills for articulating places where industry and public interest might diverge this week, I suddenly realized that the market responsibility paradigm being invoked was entirely organized around the relationship between food processors and consumers, one with obvious vulnerabilities to consumers who might exercise selective pressure on industry processes. The blind spots in this market logic appear in relation to the relative inability of food producers to exercise choice in markets (as there are not so many choices for producers, especially those who have organized their production around the [often quite expensive] operation of large scale food markets, making them price-takers and prone to whatever conditions imposed on them  make it possible to retain the possibility of credit access and social safety nets, given the temporal waits and inherent risks of farming). While slightly less catchy than “vote with your fork,” this “cost-price squeeze” is catching on as an idea, as is the “good food gap,” which Lauren Baker (current coordinator of the Toronto Food Policy Council) defines eloquently as “the policy space that exists between the farm income crisis and the health crisis,” in which “farmers find it hard to make a living growing food and consumers find it hard to make the good food choices they want to make.”

This dissonance, hard to ignore, does seem to open space for considering, for example, the challenges introduced to narrating food by the expected plot lines associated with markets. In addition to the fiction of market choice that plagues the translation between economic theory and most people’s experience of markets in items with complex values such as food, the market ideologies with which people are familiar can make it difficult for them to acknowledge important differences in the ways markets function. The most striking upending of the food market plot I have encountered, for example, helps counter the assumption North Americans tend to make in attempting to export models of mainstream grocery retail (and wholesale purchasing upstream in the food chain) as the normative way to improve access to fresh produce. This plausible story makes it difficult for us to see that globally more people may access food outside this familiar food chain than through it, and the failure for people like us to be able to understand or even see the intricate markets that connect food producers and consumers in many places makes us much more likely to try to overwrite them with markets that seem more legible or rational to us, without understanding the effects on already existing markets and the many values they translate.

“We make our world through stories,” an optimistic young narrative consultant declared to me this week, as I perched on the edge of people’s comfort zone for narrating food insecurity. “And we can retell those stories, and in so doing, change that world.” “Those stories create institutions, though,” I replied, “that we can’t just forget to change along with the stories”… but his eyes had moved on to the next chapter, and I realized I would need to lay out more carefully the plot line of how that might happen.


*I will note my thorough ambivalence at the oatmeal chat: although it disrupted someone’s very interesting line of thoughts about the manifestation of capitalism in corn (a classic vector for derailment of food politics into food aesthetics), I am intrigued by peanut m&ms being someone’s preferred oatmeal condiment, above raisins, cranberries, blueberries, and coconut, the votes of the four other people at lunch, to whom I am grateful for including me in their conversation, along with the rest of my colleagues above.