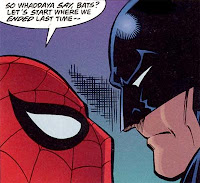 Narrative fiction takes many forms. One medium that often remains undiscussed and under-researched is the realm of comic books. Comic books have a somewhat storied history, blamed early on for the moral disintegration of youth and derided as a low-brow form of entertainment, suitable only for adolescent boys. Recently, however, comics have experienced a bit of an artistic rebirth, in the form of award-winning graphic novels like Art Speigelman’s Maus and Chris Ware’s Jimmy Corrigan, The Smartest Kid on Earth. Empirical research has also begun to take an interest in comic books, with a fascinating article recently published in the Journal of Experimental Social Psychology by Ariana Young, Shira Gabriel, and Jordan Hollar (SUNY Buffalo). These researchers were interested in how a deep identification (i.e., parasocial relationship) with a muscular superhero might affect a man’s self-perceptions. Male undergraduates were pre-selected to participate based on whether they liked Batman or Spiderman, and then these individuals were shown pictures of either superhero in either a muscular or non-muscular form. Men who saw a picture of a muscular superhero that they liked actually demonstrated stronger grip strength, as measured by a special device known as a dynamometer, than those who were exposed to a non-muscular superhero. Importantly, these results were only observed when the participant had a strong liking for the target superhero. In cases where men saw a muscular superhero they didn’t have a strong liking for, these men actually felt worse about themselves and their bodies. These results share parallels with those previously observed by Markus Appel for unintelligent characters in a written work (Appel, 2011; see our post here), reminding us that although narratives take diverse forms their effects are often similar and familiar.

Posted by Raymond A. Mar at 11:43
Labels: Effects of fiction, Empathy, Research Bulletins