Why People Love the Film Casablanca 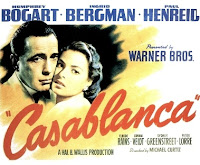 In 1943, Casablanca won three Oscars: for best picture, best director, and best writers. It starred attractive actors who included Humphrey Bogart as Rick, Ingrid Bergman as Ilsa, and Paul Henreid as Victor Laszlo. But why has it remained one of the most popular Hollywood movies ever made? It was thought of by its makers as just another movie to entertain growing American cinema audiences. One of the writers, the witty Julius Epstein, said of it: “We were not making art, we were making a living” (Hawtree, 2001). But it has been much discussed and much analyzed. So what psychological reason may there be to explain why it has been so interesting to film experts, and so continually appealing to movie watchers?

For those of you who don't know it—and I am afraid I need to say that this is a spoiler alert—the film is set in Casablanca during World War II, from where, if they could obtain exit visas, people fleeing the Nazis could take flights to Lisbon, and from there make their way to USA. Early in the film we learn that two letters of transit, bearing irrevocable permission to leave Casablanca, have been stolen. For safekeeping they end up being given to Rick who runs the Bar Américaine. Ilsa and the Czech freedom-fighter Laszlo turn up at Rick’s bar, also wanting to travel to Lisbon. Rick is full of respect for Laszlo. It becomes clear that Ilsa and Rick have a past together. In the film's single long flashback, we see that early in the war they had a passionate affair in Paris, and were due to leave together on the last train before the Nazis over-ran the city. Ilsa didn’t arrive at the station. Rick’s sardonic statements, his lonely drinking, his self-protective attitude—“I stick my neck out for no-one”—derive from feeling deeply wounded by her. Now she turns up with someone famous and admirable. It turns out that Laszlo and Ilsa are married, but Ilsa remains attracted to Rick. The film's story has been set up. Will the two letters of transit be used by Ilsa and Laszlo, or will the pull of the past be sufficient for the letters to be used by Ilsa and Rick?

The movie-watchers learn what Rick did not not know at the time of his affair with Ilsa in Paris, that she was married to Laszlo at that time. She thought her husband had been killed in a concentration camp. As she was about to leave for the station to meet Rick, a friend brought news that Laszlo was in Paris and needed her. If this were a more usual film, the lovers, Rick and Ilsa, having found each other again, would take the letters of transit, board a flight to Lisbon and live happily-ever-after in a nice apartment in New York. But they don’t. Rick realizes he must consider the fight against the Nazis, and the relationship between Ilsa and Laszlo into which he had unknowingly intruded. He gives the letters of transit to Laszlo, who leaves with Ilsa on a plane for Lisbon. Rick does the right thing and we, in the audience, feel deeply moved.

Why are we so moved? To explain this we need, I think, two components.

The first component is one that I discussed in my post on resonance, of two weeks ago (click here) on how the mind of the reader or movie-goer meets the story. In such a meeting identification takes place. In this story we become Rick, embittered though still in love with Ilsa. As Kaufman and Libby (2012; discussed in OnFiction on 5 May, click here) have shown, in identification we enter the story and take our experience from the character.

The second component is the idea of elevation, proposed by Haidt (2003). It's a strange feeling of warmth and inspiration that occurs when one sees someone doing something altruistic, like helping a stranger, or behaving in a decent way when self-interest would urge them otherwise. Elevation is a moral emotion, and Haidt’s work fits well with research by Zillmann (2000), who has shown that in fiction we are all moral monitors, constantly evaluating the moral quality of each character’s actions, feeling warmly towards a liked character who acts well, and angry at a disliked character who acts badly. Algoe and Haidt (2009) have shown in a range of studies that elevation is an emotional response to someone who acts in a good way. Mediated by this emotion, the act is contagious, and motivates the person who sees it towards behaving in the same kind of way. A difficulty of portraying it in a movie is that too often it can seem soppy. In Casablanca, with Bogart’s toughness, Bergman’s innocence, and the writers’ wit, there’s no soppiness. This film can move us over and over again.