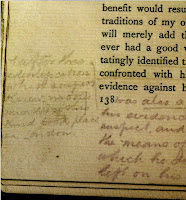 A lot of the books I read come from the public library. It seems to me that different readers have different levels of feelings of possession concerning library books. Some readers are quite aware that the books are not theirs and treat them with extreme care, never writing in them, dog-earing them, or putting a pencil marker in them to hold their place. Others feel that for those two weeks that book belongs to them. They write in it, dog-ear it, inadvertently crack the spine, carry it open in their backpack, rubber band it open, cut out interesting photos, highlight it, underline whole paragraphs, cut out sections, and use it as scrap paper in their travels.

It occurred to me recently that it might be worth looking more closely at what traces left by previous readers on these books might do to the reading experience of subsequent readers. I would hypothesize that readers of fiction in particular would experience an altered cognitive and emotional connection with the imaginary world depicted in the presence of such traces. Indeed, as creatures hyper-attentive to social presence, intentions, and perspectives, people would likely process such traces as intentional, though not directed to a particular individual in this context. Such traces, no matter how small, I propose, should influence reader engagement in fiction. Here are some questions that might be interesting to look into:

There is no doubt a number of reasons why scored books sell for much, much less than unscored books. Might the answers to some of the questions above partially account for readers’ strong preference not to be placed in the imagined presence of other previous readers? It seems to me that these questions and others in the same line would be very much worth pursuing.