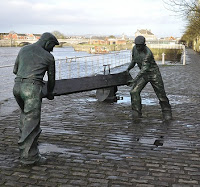 On a visit for a conference at the University of Limerick, in Ireland, I was charmed by the Aer Lingus cabin crew on the flight from Heathrow to Shannon Airport. Even their announcements about what to do in an emergency seemed to be made with a kind of concern for us passengers that was different from the recitations one generally hears on aeroplanes.

Ireland was strongly affected by the visit of the Celtic Tiger, an economic boom that began around 1995 and ended abruptly with the world economic recession of 2008. Speaking with feeling about the Tiger's departure, a taxi-driver who took me from Limerick to the University pointed out, as we passed it, a curious archeological site of concrete walls and half-erected buildings that had been intended, he said, to be the largest shopping mall in Ireland. Whereas Limerick had become well-off, now there is a sense of sadness and anxiety. The city advertises with large electronic signs the spaces in its many new car parks. A lot of car-parking space was available; this is a place without enough cars.

The University of Limerick is very large, and it's beautiful, in a park on both sides of the River Shannon. People who worked there were fond of it, which I could understand. But with the economic recession a question hovers: how to move forward? I didn't mention it to anyone but my thoughts about the place issued in this limerick on Limerick.

An itinerant chap from Toronto
Wondered wherever he'd gone to;
Some was old, some was new,
Didn't once have to queue,
What next should the folks here get on to?

As a group talked together on the conference's last evening, several of us admitted that we had vowed not to mention limericks. At that moment, evidently no longer able to contain the inner emotional pressure to express oneself in verse, which Chinese poets of the Tang period called huai (click here), a fellow conference attender let slip:

A young law professor from Nashville
Said, "Now I'm not going to be bashful;
It's just blurting out,
I might even shout …"

This limerickateur said she would think of the last line the next day, but see how much more interesting this fragment is than my feeble effort. Her ancestors came from this part of the world, so it's clear she was drawing on some inherited ability. I didn't see her next day, so we may never know what she would have found to rhyme with "Nashville" and "bashful."

The limerick is a populist, sometimes improvised, form and of course poetry-written-by-poets isn't improvised. Ireland's greatest poet, W.B. Yeats, said it would take him many days to write even the shortest poem. On the first day no rhymes would come at all, then, he said: “when at last the rhymes begin to come, the first rough draft of a six-line stanza takes a whole day" (Parkinson, 1964, p. 76).

Image: A modern bronze statue of this one-time port city's dockworkers, on the quayside in Limerick