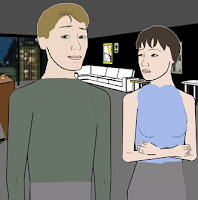 At the end of November, I attended the Fourth International Conference on Digital Interactive Storytelling, in Vancouver (ICDIS 2011, click here). My informants tell me that interactivity is the wave of the future. It's not audio-books or the Kindle that publishers should be worrying about, but the new art-form in which one doesn't just listen to, watch, or read a narrative: one participates and helps to create the narrative that unfolds as one interacts with its characters. This is a theme that Janet Murray, who gave a very engaging talk at the conference, foresaw in her lovely book Hamlet on the holodeck (1997).
Where are we with this new genre? The critical instance is Façade, a interactive one-act play which came out in 2005, written by Michael Mateas and Andrew Stern, based on Edward Albee's Who's afraid of Virginia Woolf. In Façade one is invited into the apartment of a couple, Grace and Trip, who are in the middle of a serious marital quarrel. As with most online games one can walk about in the scene, the perspective of which changes as one moves and—here is the innovative part—in Façade, one can take part in conversations with the characters, and thereby influence what happens. Some of the things one says will result in one's being thrown out of the apartment, others will precipitate one of the apartment's inhabitants leaving, and so on.
Façade took Mateas and Stern three person-years years to write, substantially more than most artistic projects, and it doesn't seem to have been succeeded by anything that builds on it. Yes, the video game industry overtook the movie industry some years ago in its world-wide financial sales. Yes, in video games one can move about, and where one chooses to go affects what one sees and what can happen. That is to say you can go here rather than there. You can face this fierce opponent rather than that one, or find this object you're seeking rather than that one. But, except for engaging in fights, interactivity of person with fictional characters doesn't seem to beckon to the captains of the video game industry. Why not?
Video games engage people in action, often of a violent kind, but also in ways that include problem solving and exploration—you can visit places like virtual Saint Petersburg or virtual Istanbul. Interactivity with fictional characters can be seen as the next big challenge for artificial intelligence. A big accomplishment of artificial intelligence has been to understand how to create visually realistic scenes in which one can move around, scenes that are as detailed and visually convincing as anything one can see in the movies. If you want to see  an example, you can look at trailers of the Tolkien-like world of the video-game SkyRim. But I can't run SkyRim on my computer. It requires too much computing power. One of my informants, who enjoys video games, told me he has at home a very fast computer that he uses specially for such games. Secondly, a great deal of the computing power goes into the visuals, and rather little into understanding language or interpersonal interaction.
In Façade, you converse with the characters, Trip and Grace, by typing on the keyboard, but the program only allows input at certain points. What is understood is picked up from keywords in a way that was demonstrated by Weizenbaum (1966) in his program "Eliza." One of the bases of what happens in Façade derives from Games people play (1964) in which Eric Berne showed how some of people's interpersonal interactions are games of power and dominance. With such game-like interactions together with keywords that the program recognizes, the program calculates indices of affinity between the player and each character, and between characters, which then influence characters' facial expressions, and what they say and do.
Façade seems to me to be full of good ideas. When I played it (after some difficulty downloading it, because it wouldn't run on my fairly new Mac), I found it didn't afford me a very convincing experience of the flow of conversation. Putting this another way, although the ICIDS conference I attended had lots of smart people engaged in various kinds of innovation, it seems that artificial intelligence has some way to go to reach the kind of sophistication in the understanding and generation of language that it has achieved in visual processing, and there seems to be some way to go before a workable theory of story generation is developed, that can generate character interactions in response to player contributions. Hamlet hasn't yet appeared on the holodeck. The next steps may be made by people who are both skilled writers of fiction who are also deeply immersed in artificial intelligence.
Albee, E. (1962). Who's afraid of Virginia Woolf. New York: Signet.
Berne, E. (1964). Games people play. New York: Grove Press.
Mateas, M., & Stern, D. (2005). Façade: a one-act interactive drama. Procedural Arts.
Mateas, M., & Stern, D. (2007). Writing Façade: A case study in procedural authorship. In P. Harrigan & N. Wardrip-Fruin (Eds.), Second person: Role-playing and story in games and playable media (pp. 183-208). Cambridge, MA: MIT Press.
Murray, J. H. (1997). Hamlet on the holodeck: The future of narrative in cyberspace. New York: Free Press.
Weizenbaum, J. (1966). ELIZA—A computer program for the study of natural language communication between man and machine. Communications of the ACM, 9, 36-45.

This certainly would be the perfect playing field for fans of "social sim games", e.g. "Little computer people" or "The Sims".

I think the makers of "Heavy Rain" aimed for generating a interactive fiction experience as well, but set in a thriller genre it shows the huge problems this generates for story consistency.

There's most certainly a long way left to go from being able to interact with, to really take part.

In the end remains the truth of what got said about the so called "interactive movies":
"Games are not a good medium to tell a story, the game play* gets in the way."

Thanks very much for this comment. I agree that there's a long distance between being able to interact in a computer game and being able to collaborate with an author, really take part in generating a story. My reason for thinking that those of us who are interested in fiction should keep an eye on this space—wide though it may be—is that thoughtful people tell me that this is where some fascinating new developments are likely to occur.

Keith, you should read Neil Stephenson's The Diamond Age (: or, a young lady's illustrated primer) -- still the best book on interactive fiction I've read. (Although, spoiler alert: Stephenson, who has a pretty wild imagination for futuristic programming, and spends a fair amount of the book on Turing machines, doesn't have a lot of optimism for AI and language -- the interactive functions of his e-book are run by a person on the other end of the network...)

Thank you Valentine; I didn't know about The Diamond Age, but I've now done a bit of web-research and it does look interesting ... I'll go and get it. And, having worked for a while at the same place where Turing once also worked (the UK's National Physical Laboratory) and having even programmed his prototype computer there, the Automatic Computing Engine (ACE) I feel a fondness for him, and his test, and his other works, so I will be glad to see these matters featured in the book.