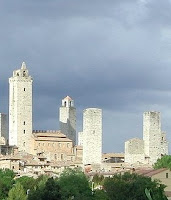 Dante's Vita Nuova (New Life) is one of my favorite books. It was written between about 1292 and 1295. It's a diary of Dante's emotional life (Oatley, 2007): part poetry (31 poems), part autobiography of the events that prompted the poems, and part structural analyses of them. So, on a recent visit to Florence, I made a pilgrimage to the house in which Dante lived and to the narrow streets—alleyways really—along which he might have walked.

There is a house called Dante's House, a museum. My guidebook says it's not actually Dante's house, but the house next door. Very well: the question is whether the muse-inspiration implied by the word "museum" would prompt my imagination of Dante and his time. The only matters of imaginative Dantesque interest I could find here were a little room with a short bed, which might have been like Dante's bed, and a model of Florence as it appeared in Dante's time.
The model showed that, unlike today, Florence was then dominated by dozens of tall stone towers, each about 20 metres square, which solved the problem of high density housing much like high-rises of today and, according to the museum, also partially solved a problem of the constant strife between the Guelphs and the Ghibellines, by enabling occupants—in case of attack—to shut the sturdy front door (the only opening on the ground floor) and retreat 30 or 50 metres to the upper stories. The town of San Gimignano, fifty kilometers to the south-west of Florence, is still dominated by towers of this kind, and I imagine the Florence of Dante's time must have looked more like that than the town does today. But if you look out for them in Florence, you can still see the bases of some of these medieval towers as you walk around.

Vita Nuova is the book in which we learn of Dante's falling in love with Beatrice. My best imaginative leap into Dante's time was in the Church of Santa Margherita, just a few steps along an alleyway from Dante's house. It's a small plain church with a half a dozen rustic wooden pews, a high ceiling and a rough dome above the altar. I liked it because, although I read that it had been rebuilt several times since Dante's time, I could sit in one of the pews and imagine Dante aged about 20, sitting there and looking past another woman towards where Beatrice sat. Here's what he wrote.

One day it happened that this most gentle one was seated where one heard words about the queen of glory, and I was in a place from which I beheld my beatitude; and halfway between her and me in the direct line sat a gentle lady of quite pleasing aspect, who stared at me repeatedly, wondering at my gazing, which seemed to rest on her (p. 53).

With this episode, Dante formed the idea, derived from patterns of courtly love in Provence, to use this lady as a screen, that is to say to pretend she was his beloved and thereby to keep secret the identity of Beatrice. Evidently Dante became quite attached to the screen lady, or at least to the idea of her, because after “some years and months” he describes how he became extremely distressed when she left Florence. Dante then decided that he'd better find another screen lady and talk started that, as Dante says, began to "defame him viciously." Evidently, this talk reached the ears of Beatrice, and the next time she saw him on the street she wouldn't acknowledge him. Dante was mortified. I like to think of Beatrice as an early feminist who found Dante's objectification of women, including herself, totally inappropriate.

I suppose I should have been doing proper things in Florence like queuing up to go into the Duomo. But I've been in there before, and I did queue up to climb inside the double layer of Brunelleschi's cathedral dome.

I found instead, on the day I visited Dante's House, that I preferred to sit quietly in the church and think of Dante, and to think too of Beatrice who is said to have married (someone else) in this same church not long before she died at the age of 24.

One could scarcely imagine a more energetic projection than Dante's onto Beatrice. According to Vita Nuova, they never exchanged more than a few words. All the same, the poetry that flowed from Dante's idea of Beatrice changed the course of European literature from a concern with the other-worldly to a concern with what goes on amongst us, here on earth. It seems to have needed a few more centuries before this concern, in literature and in life, would come to centre not on projection but on actual other people.