The Actor and the Observed, Man and Woman 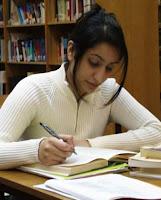 In a story, circumstances tend to take precedence over other influences in how a writer imagines a protagonist. In psychology there is a principle that helps to explain this effect. It was proposed by Edward Jones and Richard Nisbett (1971), and it's called the actor-observer bias. The bias is that we tend to experience our own reasons and other people's reasons for doing anything in rather different ways. Imagine I am a student and I work hard for weeks studying for an exam. I am the actor here, and as such I might experience myself as studying hard because I know the exam will be difficult and I know the result will be important for my future plans. If I were to see another student working hard for weeks studying for an exam, I would be the observer. I would tend to say this student was working hard because he or she was conscientious or ambitious. When we act, we tend to see ourselves as being responsive to circumstances, doing what is necessary to pursue a plan. When we observe others doing exactly the same thing, we tend to attribute their action to some persisting aspect of their personality. It’s rather like when one is driving and has to brake suddenly to avoid hitting that careless person in front.

Writers tend to arrange stories so that the protagonist acts in a way that is responsive to circumstances, that is to say, in the way we experience ourselves in everyday life. As writers and as readers, then, we feel the kinds of emotions the character would feel as an actor in following a plan and responding to circumstances that result from it.

A recent study by Marisa Bortolussi, Peter Dixon, and Paul Sopčák (2010) was about the effects of gender on reading fiction in Canada and Germany, but the results are best explained in terms of actor-observer differences.

The influence of gender on reading is a perennial question because it’s invariably found that more women than men read literary fiction. In the most recent large US survey by the National Endowment for the Arts (2009), which had 18,000 respondents, it was found that 58% of women had read a play, poetry, short-story or novel during the previous year, as compared 42% of men.

The researchers explain this effect in terms of the actor-observer bias. In general, say Bortolussi and her colleagues, men in Western societies tend to be seen as acting in response to circumstances ("he did what he had to") whereas women tend more often to be seen in terms of their personality ("she behaved emotionally"). Thus, for both men and women, our social stereotypes make it easier in stories to understand and to identify with a male protagonist, the kind of character who acts in response to the situation he is in, than with a female protagonist, the kind of character who acts because of her personality.