Dream, Wakefulness, and a Tale of Two Poets 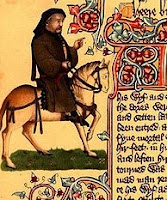 Creative writers care very much about dreams. Perhaps because of what dreams might impart to them about human consciousness, themselves, about the past or about the future, or perhaps about what to write, or even how to write it. In 1379, Chaucer began a poem entitled “The House of Fame” which, according to John M. Fyler, is his “fullest exploration of the poet’s position and responsibilities, the sources of his knowledge, and the limits of his vision” (Fyler, 1987, p. 348). The poet wishes to tell us of the wonderful dream that he had on the tenth day of December, but first presents 65 lines on his confusion and amused annoyance concerning the splintered category of dream with its many near-synonyms, and on the dreamer’s frustration at the uncertainty of knowing what a dream means. He also wants to know why the prophecy of one dream occurs and that of another doesn’t. He muses over the possible causes of dreams: the balance of bodily humours, cognitive deficiencies, illness, imprisonment, distress, disruption of routine, hitting the books too hard, melancholy, or being “ful of drede” (Benson, p. 348).

An important source for Chaucer’s poem was Macrobius, a medieval thinker who based his classification on an earlier Greek work in which five kinds of dream were presented. The “nightmare” and the “apparition” are, according to Macrobius, not worth one’s while to interpret, as they have no predictive value (Macrobius, p. 49). The nightmare seems to be a product of mental or physical stress, while the apparition is a type of dream that occurs only in a hypnagogic state. The “oracular” dream is refreshingly straightforward: a pious person visits the dreamer and tells him or her of a future event and recommends how to deal with it. The oracular becomes a “prophetic” dream if the visitor turns out to be right. The “enigmatic” dream “conceals with strange shapes and veils with ambiguity” its own meaning (Miller, p. 50). In spite of his confusion, frustration, and sense of inadequacy before the concept “dream”, Chaucer’s narrator ploughs ahead, excitedly describing his dream in 2,048 more lines of verse that read like a story. The narrator’s poem (unfortunately, unfinished) is the dream. The implication here is that in dream theory of the time the dream-state consciousness was taken to exist across an ontological chasm from the consciousness of wakefulness. The dream seems to be somewhat pathological, but nevertheless, if it’s the right sort of dream, capable of conveying useful information, and also capable of occasioning an enjoyable read.

Five hundred and forty-five years later, André Breton, writer of poetry and prose, and everything in between, was rather obsessed with states of consciousness, regularly engaging in automatic writing with his colleagues. Automatic writing, of course, is not produced from the sleeping consciousness state, but much of Breton’s poetry reads like dream. Nevertheless, unlike Chaucer’s dream poem which is in verse, but reads like a story, a sample of one of Breton’s automatic writings from 1921-22, but published in the 1924 Poisson Soluble, might convince us that there is indeed an absolute difference in kind between dreamlike states and wakeful consciousness:

In the piece of school chalk there’s a sewing machine; the little children shake their curls of silvery paper. The sky is a blackboard erased minute by minute by the wind. “You know what happened to the lilies who didn’t want to fall asleep,” begins the teacher, and the birds begin to make their voices heard a little before the last train’s passing. The class is on the highest branches of the return, between the greenfinches and the burnt spots. (Breton, 1988/1924, p. 368-369).

Much of the stuff of dream is here: lack of calibration of size among elements, unexpected parts amalgamated into wholes, personification of objects, unexpected juxtapositions of people, objects, and places, and introduction of strange elements into familiar routines, a presentation strong on image and weak on logical concatenation. The assumption is no longer that the dream may convey useful predictive information, or indeed any information per se, but that there is value in the writer’s accommodating, as best he can, the mind’s production of images that seem not to be sculpted or concatenated through the mind’s logical processing, and perhaps that reading the product of a dreamlike state, that does indeed read like a dream, will prove a positive and aesthetically worthwhile experience.

Eighty-six years later, a very engaging review of research examining the relationship between the phenomenology and neurophysiology of dreaming, by Yuval Nir and Giulio Tononi, appeared in the February, 2010 issue of Trends in Cognitive Sciences. The authors review contemporary dream research, noting for example, that, participants in experiments report dreams (defined as “vivid, sensorimotor hallucinatory experiences that follow a narrative structure” [p. 88]) in both REM (rapid eye-movement) and non-REM sleep, contrary to earlier experimental work; that those aspects of wakefulness and dreaming that are similar in one’s personal experience are in fact similarly represented in the neural substrate; that there are developmental constraints on dreaming; that there is consistency between one’s cognitive capacities in dream and wakefulness; and that visuo-spatial capacity correlates better with dream quality than linguistic capacities. Further, there is reduced “voluntary control of action and thought” (p. 89); reflective thought (with some exceptions) is impaired: such oddities as we experienced earlier in the Breton passage are accepted without challenge; there is reduced awareness of self, which may contribute to the finding that the emotions of anxiety, anger, fear, joy and surprise are experienced in dreaming, but rarely are guilt, sadness, or depressive feelings; and memory is impaired within the dream. The authors also present a clear and detailed table in which the psychodynamic, activation-input-modulation, and neurocognitive models of dreaming are delineated.

Finally, Nir and Tononi ask, “Are dreams more like perception or imagination?” The response is cast in terms of the differential processing of “low-level sensory” and “higher-order” areas of the brain. If the first were triggering the dream-state, input from the brainstem to the visual cortex would then be meaningfully integrated by the higher-order areas. If the second were the trigger, motives would recruit the necessary mental imagery. The authors note that the critical tests determining patterns of signal flow have not yet been done, but the preponderance of empirical evidence points to initiation by higher-order areas. “If this view is correct,” they conclude, “waking consciousness is more like watching the news in real time, whereas dreaming is more like watching a movie created by an imaginative director” (p. 97). Thus, the research may not yet show that correctly interpreting a dream can tell us the future, but a picture of the neurophysiology of dreaming tells us much about the phenomenology of dreams, and perhaps something about creativity itself.