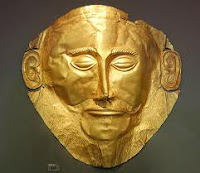 In December 1865, John Ruskin gave a commencement a speech to the cadets graduating from the Royal Military Academy at Woolwich. It was based on a startling thesis – that war is a necessary precondition to art.
All pure and noble arts are founded on war; no great art ever yet rose on Earth, but among a nation of soldiers. There is no art among a shepherd people if it remains at peace. There is no art among an agricultural people if it remains at peace. Commerce is barely consistent with fine art, but cannot produce. Manufacture not only is unable to produce it, but invariably destroys whatever seeds of it exist. There is no great art possible to a nation but that which is based on battle.
In evidence, Ruskin traces the preoccupation with war and military images in art from Egypt to Greece, to European knights, and onward. My first thought in response to his speech was that from a scientific perspective, the evidence is, at best, correlational. I almost started making a list of confounding variables, then stopped myself to ask a question – not whether art indeed fuels war, but why would Ruskin choose to believe so.
War evokes death, and perhaps it is death that is the culprit without which there could be no art. Art arose around the same time that our predecessors chose not to throw their dead children and spouses away in the forest, but bury them with trinkets that would help them in the next world. So, perhaps it is the belief in the world that is invisible, transcending the senses, the world to be respected, propitiated, the world ever absorbing the dead, that made art possible. But there is, and always has been, death even without the war, so we are left searching further for Ruskin’s high esteem of the power of war to engender art.
A clue could lie in Ruskin’s low esteem of ‘practical’ Romans whose battle wasn’t as ‘poetical’ as that of Greeks or European knights. Here, the distinct evocation of the idea of honor and courage, battle for higher aim, even for its own sake, parallels the idea of art as the creation of objects whose function is not practical, but for its own sake, too. But here I diverge from Ruskin. Just as art is not for its own sake, but a connection to a world that is not material, but experiential or relational, so a war is never for its own sake, but either rapacious or relational. After all, Homer celebrates the reluctant and sometimes misguided battle of Achilles, dying to revenge his beloved Patroclus, but has no kind words for ever-acquiring Agamnemon. And so it is with the war in general. Below the layers of self-deceptions and justifications, it is motivated either by an instinct to acquire and dominate, or protect (or revenge the loss of) one’s relationships, one’s means of connecting to another.
And then perhaps there is the courage that inevitably follows when one is willing to face one’s enemy willingly and openly to protect something that they value more than their own life. It is the courage that in today’s world of various automatized means of destruction has been becoming extinct. How much courage does it take to destroy a life half-way across the world, by sitting in one’s cubicle and pressing a few buttons on the keyboard?
There could be many things without which there could be no art – death, suffering, courage to protect relationships of value at the cost of one’s life, even the existence of warriors unafraid to die for something they value more than their life. But war, with its rapacious greed, indiscriminate destruction, I think war is not one of them.
Ruskin, J. (1865/2008). Woolwich: John Ruskin observes that war gives birth to art. Lapham’s Quarterly, 1(1), 28-30.

Well written, thoughtful article. While Switzerland may not be the world capital of artists, during 200 years of peace they have produced a fair number of artists: Giacometti, Tauber-Arp, Hoddler, Vallotton, Fischli and Weiss.