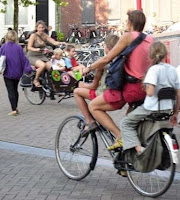 Early on a Tuesday morning in July, before the tour boats had started their rounds, I left the hotel at which I was staying in Amsterdam, and walked along canal-sides and little streets. Amsterdam is one of Europe's most inviting cities. It's not too large, and it has everything one could want in a city. The people are decent and, for foreigners like me, extra decent in that as well as Dutch they all speak other languages, like English. The canals constantly remind one of Holland's seafaring. Like many other great European cities—Paris, Lisbon, Venice, London—Amsterdam prospered from its colonies, and as I look along the canals at the wonderfully shaped Dutch houses, each with its beam and hook at the peak of its roof to haul up furniture that would be too wide for the stairs, I imagine each house being built by a merchant who was successful in importing and exporting, spices, cotton, diamonds, tobacco, mahogany, or other kinds of goods that enabled Europe to prosper. Such goods, of course, were good for the Europeans, not so good for the Africans, Americans, Indians, and Chinese from whose countries they came.

In medieval times, the Christians of Europe knew that, since the Fall, they were all born into sin. There was nothing they could do by their own efforts to escape this state. The only salvation was to recognize their sinfulness and to allow themselves to be saved. It was an individual matter of grace, which means gift: between God and each of (capital H) His creatures. Since the Enlightenment, and the since the last convulsions of internecine war between the colonizing nations of Europe, the Fall seems to have become less a matter of the individual and more of society. The moment one puts on almost any piece of clothing, one takes part in a nexus in which what has gone into making the clothing has involved someone on the other side of the globe working for wages not far removed from slavery. None of us, producers or consumers, can free ourselves.

How do Amsterdamers deal with the societal sin of Western consumerism? Perhaps there is a clue in their favorite form of transport: the bicycle. Along the canal sides and in the special bicycle lanes that run along almost every street one sees people pedaling: women in cotton skirts, men in white trousers, elderly people in elderly-looking clothes, all going at exactly three times walking pace. This morning I saw one man with a largish upturned table on his handlebars. Some people take passengers, either young children in child-seats, or people perched side-saddle on the pannier-carrier at the back. Cars are in a minority, and there are no SUVs. The cars one does see seem to have got the idea of being small and quiet, not congregating in traffic jams, and not annoying pedestrians or cyclists. As a society the people of Amsterdam may be as sinful as city-dwellers elsewhere in the West, but they sin in a modest way.