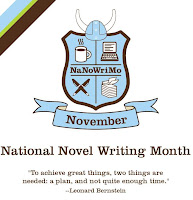 Today is the day to begin preparations for National Novel Writing Month, when 150,000 + enthusiastic writers begin writing a 50,000-word-or-longer novel on November 1 and submit it before midnight local time on November 30. But why, why, prepare now? Because you can’t start writing until November 1, but, according to the NaNoWriMo website, before that date “outlines, character sketches, and research are all fine, as are citations from other people’s works”. It’s just that none of the writer’s own “previously written work” can be included in the work that’s uploaded in your official submission to the website between November 25 and November 30. The genre is up to the writer. The organizers note, “If you believe you’re writing a novel, we believe you’re writing a novel, too.”
It may be a good idea, then, to take part of this Labour Day to plan. Make the shopping list for writing utensils, paper, pencils, computing necessities, necessary comestibles, feel-good snacks. Put the dictionary and thesaurus you already own where you can get to them without tripping over the laundry baskets. Put away the magnetic darts and the Rubik’s cube. You won’t need them during November. You’ll be writing, not thinking about writing. Book the babysitters. If your cousin from Portland could visit before or after November, that would be best. If the neighbors will be renovating, plan your writing hours around the noise. Ditto for music practice. The goal is to optimize your chances of getting to 50,000 words. The NaNoWriMo website reports that in 2009, there were 167,150 people writing briskly to get to the 50K; 32,178 got there. If you’re going to try it, you’ll want to be in the second group. They walk away with a winner’s certificate, and most importantly, of course, the knowledge that they completed a novel in a month.
Then, once the basics are taken care of, re-establish cordial relations with that character who has not been happy to be kept waiting on the sidelines while you worked on the novel destined to be an international bestseller... when it’s complete. Read NaNoWriMo’s Pep Talk Archive. Remind yourself that 56 published authors started their novel during National Novel Writing Month, and at least one, Sara Gruen, wound up with a New York Times #1 bestseller, Water for Elephants. Finally, don’t even think about writing just one word 50,000 times. It’s not allowed. Good luck. Good luck. Good luck.
Gruen, S. (2007). Water for Elephants. Chapel Hill, NC: Algonquin Books of Chapel Hill.

Thanks for the reminder.
Looking forward eagerly to November and NaNoWriMo. I took part for the first time last year- and completed it successfully.
The most part of my soon to be published debut novel stemmed from NaNo:)

Thanks very much Prem Rao, and congratulations both on finishing your novel last year and on your upcoming publishing debut. Excellent!

I thought, perhaps, I should mention, too, that although NaNoWriMo is entitled "National Novel Writing Month," really it should be called International ..." It started in USA, but it's open to everyone writing in an alphabetic language. They haven't yet worked out how to handle languages like Chinese.