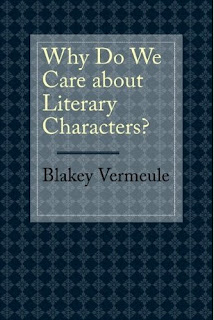 Rebecca,
Thanks for this essay.

I read this essay when you first posted it and enjoyed it very much. But I’ve never decided quite what I wanted to say. So, I am going to say something now even though it may be less than crystal clear.

You suggest that we are the sort of creatures that are uniquely good at caring. So, would it follow, then, that through caring we are both happier and more ourselves?

I can’t help mentioning that in Book One of Plato’s “Republic” the character of Socrates says we are uniquely good at being just. When you add that the job of a just person is never to harm others, but always to make them better, that’s a powerful thesis. It hasn’t got “care” or “love” in it verbally, but if someone makes me better, that should mean making me better in all sorts of ways.

Philosophy is filled with dismissive reactions to the view of love to be found in Plato’s texts. This finds an echo in some of the lines from Frankfurt that you quote. Frankfurt’s denial that we love a person for his or her repeatable properties belongs to a tradition of reacting against some things in Plato. How can I justify loving one beautiful body more than another—or, when it comes to that, loving one beautiful soul more than another? (I say this without reading Frankfurt, though you’ve convinced me that I should.)


I’ve been reading the Plato scholar Naomi Reshotko’s book on Socratic ethics,(“Socratic Virtue”) and I can’t help mentioning that in the background of discussions about love or caring is a fear that if the people we love (or care for) benefit us, then somehow our love is not pure or ethical. Reshotko argues that this is a peculiar feature of contemporary (post-Kantian) thinking not found in Socrates. Socrates thought good people make those around them better, and bad people make people worse. (in the Apology.)

Finally, you have done me a great service by drawing my attention to Frankfurt’s writings. I shall have to get hold of them. But, I found the passages you quoted implausible, as a whole. Frankfurt seems to be saying: Something about the nature of our psychological states has the consequence that we develop when we care, whether or not the thing that we care about is really good for us. Is that what Frankfurt thinks?

I realize that we often love those who are not good for us, but, if we try to be realistic or down to earth, is that really what we want? Or what we would recommend to others we care about?

This returns to the Socratic point I mentioned above.

Well, thanks again for an essay that I enjoyed reading, and thanks too for pointing me in the direction of Frankfurt.

Sorry, one further quick comment. Why do we care about people and fictional characters? Why do we need or want more? One suggestion: we are ignorant and can always learn more.....we never finish with knowing the things we care about.....

Thanks very much, Mark L., for your comments and questions, which are central to the issues Frankfurt raises. Frankfurt does in fact address some of these questions, albeit not in the parts of his work that I cited in the post. I’ll address the questions you raise more or less in the order you present them.

For Frankfurt, it does indeed follow that through caring about other things and persons, and I suspect, about literary characters, we are more ourselves. From what I’ve read of Frankfurt, I don’t think he would phrase this in terms of becoming happier. He does talk about experiencing “wholeheartedness” or feeling “satisfied with ourselves” (2004, p. 99). He mentions in a footnote that Spinoza considered this experience to be “the highest thing we can hope for” (Frankfurt cites the Ethics 4-52S). So, in that sense, it may be a sort of happiness.

Concerning the divergence between Frankfurt and Plato, it seems to me that Frankfurt is not concerned with justifying for others our care or love for one thing rather than another. In the first paragraph of his essay “The importance of what we care about,” he cleaves questions concerning “what to care about” (1998, p. 80) rather cleanly from those concerning epistemology, that is “what to believe,” and (some might argue too cleanly) from those concerning ethics, that is “how to behave”. He notes, “those disciplines need not reflect upon the nature of caring as such, nor are they obliged to consider what is implied by the fact that we are creatures to whom things matter” (p. 80). Thinking about care and love is not a normative enterprise for Frankfurt.

Contemporary ethical concerns about the possible impurity of care or love in the presence of self-benefit, which Reshotko claims was not present in Plato, is a problem that Frankfurt takes very seriously. The last third of his book The Reasons of Love presents a chapter entitled “The Dear Self,” which cites the phrase Kant used to describe the force that he took to be the most important object of our concern, even when faced with questions of duty toward others. Frankfurt claims that Kant is not so much mistaken as simply “out of focus” on this question (2004, p. 78). He takes Kant’s concept of “the dear self” to refer more strictly to a concern with indulging the self, rather than to loving the self, and claims that we do not show concern for ourselves through indulging “impulses and desires” (2004, p. 79). He thinks self-love, at least in its rudimentary form, is “the desire of a person to love”, and as “a person’s desire to have goals that he must accept as his own and to which he is devoted for their own sakes rather than merely for their instrumental value” (2004, p. 90).

The subject of the penultimate section of Frankfurt’s (2004) book is the question of whether a person can “love what is evaluationally nondescript, or what is bad, or what is evil” (p. 98). He thinks people can and do sometimes do this. To the inquiry of whether we would really want to love those who are not good for us, or whether we would recommend such a love to others that we care about, Frankfurt would again appeal, I think, to the cleaving of a philosophy of care from the philosophy of ethics – but also to his concept of “volitional necessity”. The individual cares about “an object which he will be able to care about” (1998, p. 94). For Frankfurt, the question to be posed is not a normative one, but rather a descriptive one.

Now, there is an important bit that I have left out in responding to your comments. That is Frankfurt’s concept of “wholeheartedness,” which is a key component of his model of care, love, and self-love. I have left this part out here because I would inevitably not describe it as eloquently as Frankfurt himself . Frankfurt’s writing style is a pleasure to encounter, at least in my opinion, and so I would refer all interested in these questions to the essay and book cited in the piece. (I will address your last point in a second comment.)

Concerning our knowledge of the things we care about, reminds me of Keith’s post of September 9, 2010 in which he asks, “Does a piece of fiction need to be as long as a novel or a television series for a fictional character to become real, to be really loved?” I think that this is an important question, and it resonates well with your suggestion that we don’t really finish with knowing the things and persons we care about. Perhaps we read novels when we feel uninhibited in engaging our caring selves, when we feel ready both to know more and more about another (fictional) person, and indeed ready to want to know more about her or him. It's possible that we read short stories when we are experiencing less capacity for engaging in the emotions and needs of others. Thanks again for your comments.

thank you very much for your essay and further explanations. I could agree with them from the perspective of a reader: I also don't explicitly search for stories involving successful characters, but the ones who are imperfect and vulnerable and perhaps suffer some loss during the story. This is what makes them human and by engaging with them I understand better my humanity as well. This helps me to feel the 'wholeheartedness' - to be satisfied with myself in spite of the mistakes I've made or the characteristics I am not proud of. Literature is thus one of the most important meands that helps me to achieve a psychological stability and overcome bad moments in my life. It is in this sense that I perceive it as evolutionary useful.