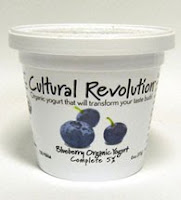 Yogurt represents an interesting set of relationships between my household and the current food movement. When I wonder about how to untangle the different meanings and motivations driving people’s current high-pitch engagement with food, thinking about the roles yogurt plays in my everyday life makes it clear to me how hard it is to parse the various parts. I begin to make the attempt to parse the narrative relationship with yogurt here to follow up on my recent threat to consider the ways that people use mundane decisions like those about what to eat to re-narrate their experiences.
When I tried to parse my breakfast earlier this week, and figure out just what it was that the twenty minutes I spend every week turning what part of the jar of milk we don't use in tea into yogurt, the endeavor took over an entire morning. It turns out that a seemingly small decision several years ago to reduce the irritating stream of plastic containers moving through my kitchen has led to a rather complex relationship with breakfast. I will skip, for today, praise of fermentation and all the interesting things I've come to appreciate via yogurt (plus all the improvements to my quality of life it's made, since I'm sure these could be found in the food literature), and will focus, instead, on the implication of re-narrating something like breakfast.
It was not entirely an act of fiction to embark on what eventually became a yogurt making habit. It was, however, something of a fabrication: in my irritation with plastic tubs, I decided, rather abruptly, that I would like whatever kind of yogurt came in a returnable container -- and although the thin kefir-like yogurt I found seemed a bit odd at first, I did, indeed, come to like it. This was not a decision about taste, particularly, but rather about delineating a particular kind of character. I could just acknowledge it as a cave-in to neuroses about environmental stuff, but the decision has a quality distinctly like that one might make in trying to express just how a particular character might react to something on the sidewalk or arrange her morning.
And in the same way that Virginia Woolf uses the dinner scene in To the Lighthouse to allow her own, her readers, and her characters' own explorations of who they are and what they're about (as well as what kinds of structural constraints they're up against), we use the quite accessible decisions that can be made about something like food in our everyday lives to explore what sort of possible characters we are, or might be -- as well as what kinds of settings we find ourselves in. This all seems a bit obvious when pointed out, but understanding the forces at play seems useful, particularly in contrast to the striking degree to which food decisions are often quickly justified as absolutely necessary (for health, aesthetic, cost, or ethical reasons, for example).
(Props to Cultural Revolution, whose culture I enjoy in my regular yogurt habit.)