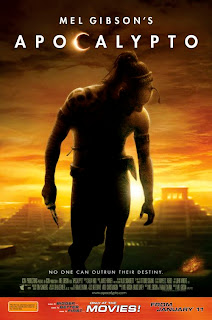 I’m not a big fan of action movies. What bothers me is not that the protagonist is most often chased throughout the movie, jumping out of (through, onto) moving vehicles, dangling from or climbing the walls, delivering shots or skillfully escaping various projectile weapons. It’s that once the excitement is done, nothing much remains. It gets tired and tiring very quickly, and in the end makes me feel that I would have as good of a time trying to cross a very busy Toronto intersection. It never occurred to me that the reason why the effect of action movies may not be lasting or profound is that very frequently they are not done very well. I just couldn’t imagine what a well-done action movie would be like.
Last night I watched Mel Gibson’s Apocalypto, and for the first time felt moved, moved rather deeply, by an action movie. It may seem an unlikely combination, Mel Gibson directing and co-writing a film on a decline of Mayan civilization. But he got something right – not necessarily the details (though the details seem OK according to some experts on Mayan culture) – but the feeling of it. On surface, this is no different than any other action movie – the protagonist is still being chased by the ‘bad guys’, running, climbing, dangling, fighting, leaping. The difference is that the meaning of the action is placed in the context that challenges our own understanding of what it means to survive.

Apocalypto is a meditation on fear. It confronts us with the stark reality of having to negotiate our continued presence or potential destruction in a world where the most grotesque cruelty will come not from the world of wild beasts but from the familiar hands of other humans, even those sharing one’s language and culture. In most action movies we feel indiscriminately tense that no harm should come to the one who is chased (we must still have hearts of prey to be so easily identified with the pursued and not the pursuer). In Apocalypto, the protagonist is teaching us how to negotiate fear so that death, if it were to come, is done as well as living. And finally, that running away and running toward may look alike, but are not.
Not at all bad for an action flick.
Posted by Maja Djikic at 20:11
Labels: +Reviews

Nice to know that Gibson isn't destroying everything he touches. The last film of his I saw was "The Passion", which, though moving and powerful, seemed a gruesome reflection of a tormented soul.

Jared, he's still gruesome. But there seems to be a point to it.