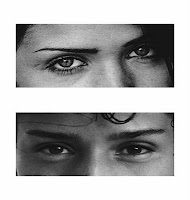 The relation between reading and empathy has been much discussed here at OnFiction (related: Theory-of-mind). With research demonstrating that there is an association between the reading of fiction and the ability to infer the mental states of others (Mar et al., 2006). Recently, there has been some investigation into the mechanism or process that might underlie this association. Lee and colleagues (2010) examined a number of personality traits to see whether any of them would predict the ability to recognize the mental state of another person. The task they used was developed by Simon Baron-Cohen and his colleagues (2001), and it involves presenting a picture of a person’s eye region accompanied by a multiple-choice question regarding their mental state. Gender, self-esteem, and various other personality traits did not predict performance at all. However, those who reported being more engaged by fiction, more transported into fictional narrative worlds, tended to do better on the task. Much in keeping with this finding, we found this trait to be a partial explanation for the relation between reading fiction and empathy (Mar et al., 2009). What this means is that the ease with which we can imagine ourselves to be a part of fictional worlds can in part explain why reading fiction and empathic performance are associated. However, it is not a total explanation, and there is still a great deal to be learned about the nature of this relation.


* As always, readers interested in any of the original research articles mentioned here can contact RM for a copy.

Baron-Cohen, S., Wheelwright, S., Hill, J., Raste, Y., & Plumb, I. (2001). The “Reading the Mind in the Eyes” Test Revised version: A study with normal adults, and adults with Asperger syndrome or high-functioning autism. Journal of Child Psychology and Psychiatry, 42, 241–251.