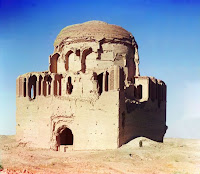 What does reflection about reverse sublimation say about our comportment toward muses? This line of thought raises key questions about the "socially useful" qualifications for creative production, particularly as they may be considered in the realms of artistic critical practice, education and research, and socially-networked new media like this magazine (and, probably also usefully, in terms of the relation of all of these modes of production to mechanisms that attempt to capture value from such realms -- one of the four tabs in my text entry window, I cannot help but note, is "monetize"). For one thing, thinking about reverse sublimation compels me to acknowledge more than usual the agency of muses -- they're not just figments or reflections of ours -- and to think about the relationship between the things we co-create with muses and the way we appropriate these things in a muse relationship.

If, for example, muse relationships are part of the reward structure of intensive exploratory conversation (a reward structure I'm suggesting we don't understand very well: psychologists like Matthias Mehl at the University of Arizona suggest that people who engage in such 'deep talk' are happier, but we don't know whether that's because of the satisfaction of the exploration or of the bonding with the 'interactive partner' -- or because people who are more likely to engage in substantive creative exploration are better equipped to navigate their way to engaging activities satisfying to them), there are questions to be addressed about the relationship between our and our muses' ideas of satisfaction and utility.

Another question arises: Is the attribution of muse status partly a way we defensively navigate co-authorship? We experience intensive conversation in parallel tracks: the things that interactive partners are thinking about in tandem, and then our own reactions to our conversations and interactions. Much of the sexualization of muse relationships appears to arise as we try to figure out these relationships in the charged and unusually intimate process of probing the shape of the space between one person's thoughts and being and another's.

If sublimation is celebrated (as it so often is) for its capacity to transform 'base,' 'animal' desires into refined productivity, reverse sublimation seems dangerous (from some perspectives) not only because it encourages us to look more squarely in the face of inspiration, but also because of the way it releases the bounds that determine social utility, and particularly the social utility of productive individuals. Moral tales of muses seem often to emphasize the destruction of the artist by means of exploration of the muse, particularly by non-conformity to rules imposed as part of benediction (the inset illustration, for example, is Sergey Prokudin-Gorsky's ~1910 photograph of Ahmad Sanjar's 1157 mausoleum built to lure his fairy wife back after alienating her by breaking such rules) -- or they emphasize the destruction of the muse itself, and thereby the inspiring relationship, often through the process of being destructively consumed or subsumed in the relationship itself. Not enough individuated appropriation, perhaps.

Prosaic as this seems as a tentative resolution, then -- and prosaicness may be a significant issue when broaching the role that the heightened arousal of muses provides by way of what is required for the satisfaction of artistic production -- I cannot help wondering about the relative silence in the mythology of muses on reverse sublimation. Do we not hear about comfortable arrangements worked out with those who inspire us because these arrangements are never comfortable? Is there a machine function supporting otherwise unsupportable proximity to the productive unknown in the uncertainty of what we desire, and of not knowing whether it will fling us gracefully into the next paragraph or awkwardly into the relationship we thought (or felt) was simply the way into that next thought?

Ever a champion of the explicit, even I have a faint sense of the ways in which this particular defense mechanism protects itself from direct inquiry. Particularly when one's interest in the ideas at hand is strong, who wants to risk good conversation by pointing out that it's not actually about sex?

Lenten in the almost early spring,
conversion and I cling together,
focused through magic
lenses of conversation, prosaic
enough to be not just sublime.

I resist myself when you talk,
unpry myself joint by joint
at each thought’s rush,
wish not to hold this talk so tight,
but cannot stop my desire for knowing something else.

My blank window gazing peoples with your dropped
words, and as I reword myself,
loosen my grip, I can revise the argument that
what we want is not each other
but this conversation.

Thank you so much Valentine for this post, and especially for your poem. I have often thought about the relation of conversation to musing over something I am writing. As to the activity of writing and re-reading and thinking and re-writing, none of stock metaphors seems able to bring it alive. "Revising" makes it sound like a chore, when it's often a delight, the route to thinking thoughts I would not otherwise have thought. "Struggling with" is too combative. "Reworking" is too laborious. "Editing," well—perhaps—though the snipping sound of those scissors makes me anxious. "Conversation" comes close perhaps because, as in your editing-conversation poem, there is the erotic: the taking in words to become thoughts that become part of me and the putting out something that might make a small completion at the same time that it might touch the other in some close way and be taken in.

Valentine, I've enjoyed reading the various things you've written, and what's more, between what you've said and what Keith said about them (brief though it was) I've realized there are some things here I've never thought about that I might like to.
More to the point: I cannot resist mentioning (on the subject of "small talk") that the linguist Wierzbicka has claimed that it is a peculiarly "Anglo" cultural construct. She also claims that Polish conversational practices favor sincerity over an overriding desire not to offend. I am very unsure about my overall evaluation of such claims, but I can find some support for the idea that conversational practices vary between countries in my own reactions to some things that were said to me Slovakia when I lived there. People sometimes spoke very directly to me in a surprising way.
I also wish to make the brief observation that Socrates' often cited remark that the "unexamined" life was not worth living was itself a reference to the importance to him of non-superficial conversation.
And lastly, I just want to mention a line from Isak Dinesen. I quote from memory, so I won't be precise: A character somewhere says/thinks that there are only two things worth thinking about: What am I going to do next? Or, What did God mean by creating the world?