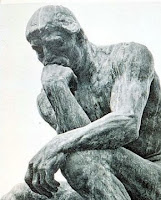 "Byron … describes what he sees—I describe what I imagine—Mine is the hardest task." So wrote John Keats in a letter to his brother George in September 1819. Keats, I think, is one of the most affecting and unusual poets in English, in part because he was able to depict the movements of the imagination, conscious and unconscious.

The best book I know on imagination is by Paul Harris (2000). It is focused on childhood. In it Harris points out that in pretend play children create whole imaginary worlds. They can for instance, create the world of a tea party in which pretend tea is poured from a toy teapot into toy cups. If an adult knocks over a cup and says, “I’m terribly sorry,” and makes a show of wiping up the pretend spillage, and then says “Can you fill it up again, please,” the child knows to bring the teapot to pour pretend tea into just that cup that was pretend-spilled, and not into any of the other cups, all of which—in the real world—are also empty. It used to be said that children find it difficult to distinguish fantasy and reality, but this is not so. Children at the pretend tea party know that nothing will get actually wet when pretend tea is spilled. They can create a whole self-consistent pretend world, which they know is different from the ordinary world, and they easily maintain the boundaries between the two.

One might think that this kind of imaginative play is mildly interesting but essentially frivolous. Not so. Imagination of the kind that starts in childhood is the gateway not just to literature, as Keats discerned, but to adult thinking. In her experiment-based book on how imagination is necessary for creating mental models (including models of how the world might be but is not), Ruth Byrne (2005) has said that rational thought has turned out to be: “more imaginative than cognitive scientists ... supposed,” and that “imaginative thought is more rational than scientists imagined” (xi).

One of the experimental studies about which Harris has very interesting thoughts is that of Aleksandr Luria (1976) who, in 1931 and 1932 travelled to Uzbekistan to examine the effects of literacy programs that had been instituted in the USSR at that time. In a post entitled "The actor problem" (for which please click here) I described one of Luria's studies. As compared with people who had not taken a literacy program, in this study Luria found that those who had taken one were enabled to move beyond their immediate experience, so that in addition to experienced-based thinking they could start to think in abstract ways. Harris explains that the educational programs were very elementary. It was not that people who took them became widely knowledgeable. The programs inducted them into the possibilities of imagining "what if?" They could do this because they had been able to play as children, and in that play to create imaginary worlds. When we take on reading-based education, we become able to use our child-derived imagination to guide our thoughts by something beyond the immediate, for instance by ideas or by words.

Raymond Mar and I (2008) have argued that abstraction is central to fiction: the literary notions of action, character, emotion are all abstractions. Imagination is not frivolous. It enables one to think. Fiction is one of its gateways.

Paul Harris (2000). The work of the imagination. Oxford: Blackwell.

Raymond Mar & Keith Oatley (2008). The function of fiction is the abstraction and simulation of social experience. Perspectives on Psychological Science, 3, 173-192.

You wrote that imagination is necessary for creating mental models (Bryne, 2005) and for understanding fiction. Similarly Busselle and Bilandzic (2008) state that for reading comprehension and engagement readers have to form mental models of the story. Interesting link!

Thank you very much, Barbara, for this comment, and for this reference. I have looked it up, and it's very interesting. It's good to know this link between mental models and imaginative fiction has been made by Busselle and Bilandzic. Much appreciated.