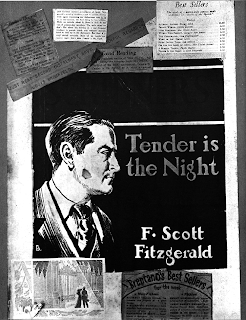 “It’s good, good, good. When it’s published people will say that it’s good, good, good.” This was F. Scott Fitzgerald speaking of his own book, the book he intended to be the great American novel of his time. He had written more than 400,000 words, only to throw out three-quarters of the manuscript, and then kept re-writing, convinced that once done, it would take the world by storm. He didn’t mind it took time – the whole nine years – to complete. Tender is the Night was finally published in 1934. The highly anticipated reviews were, at most, indifferent. Fitzgerald’s puzzlement over this comparative failure led him to dissect the book for its flaws. He believed that if only he could shift few scenes about, if only he could present the plot, the characters, a bit more clearly, then… then the world would finally get it. He did manage, in subsequent printings to move a few scenes about, but to no wondrous effect.

It is understandable why Fitzgerald may have thought the book promising. Dick Divers, a handsome, socially suave, gifted psychiatrist is driven to alcoholism and ruin by a marriage to a beautiful, schizophrenic, Nicole. The plot, thinly, if at all veiled, recapitulation of his own destructive marriage, is dense and glamorous. Fitzgerald’s startling aptness for a perfect metaphor does not flag either. The problem, the only problem, is that it is hard, somehow, to really care about Dick Divers. But why should this be so?

It could be the over-writing, or under-writing, or perhaps both. First, we are overwhelmed at just how handsome, suave, and nurturing Dick Divers is. So much injustice, and done to such a fine man! Some novelists can’t resist the fantasy of their own person, and by writing themselves into the leading men and women, end up crushing the lead character under the weight of their own immodesty. Or perhaps it is the lack of the shade and depth that comes from believing what is in one’s mind is already on the page. Novelists, like all others, have enough compassion and interest in their own lives that it is hard for them to understand why a character that resembles them so nearly should not automatically lay claim to interest and compassion of others. What results is a flat, unmoving and unmoved character, struggling to arouse enough interest to carry the reader on her voyage through the book. If only we could be more tender to Fitzgerald’s keen disappointments.