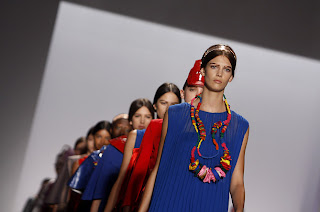 The show was ending, to be closed, as was customary, by the designer’s final bow. The models, tall and angular, led him by his hands, coaxing him, charmingly, onto the stage. He seemed very small and compact, and calmly dressed – compared to the scatter of wandering limbs and fabrics that surrounded him. Barbara was watching intently, second row from the stage. She felt feverish as she watched them - a row of hallucinogenic visions roused by few concentrated drops of prestigious genetic material.

Barbara suspended her breathing for a second…. “That’s what it looks like when nature gets it right.” The line proceeded toward the backstage, and Barbara pulled in her stomach and tightened her buttocks, approximating how their beauty would feel in her own body. The spasm wasn’t sustainable. It was starting to hurt. The show was over.

Barbara stood up, and her shortness overcame her unpleasantly, as if she stepped accidentally into a deceivingly deep puddle. She put on her dark glasses. She found that people are very curious who is hiding behind the large dark glasses. They wonder whether it is some celebrity, trying to escape attention. They look at her. She squeezed slowly through the crowds, but suddenly felt small and ridiculous in her dark glasses, and took them off.

She could be a model. She put a wisp of her longish blond hair behind her ear. She had the right angularity of the face, the right acuteness of the chin… if it only weren’t for her stupid 5 feet and 5 inches. And some of her body curvature. John didn’t seem to mind. He thought she was a model. He said “one can’t tell how tall or short you are in a photograph.” She posed for him – even though he is only studying to be a photographer. Something might come of those pictures. He said some of them came out beautifully. He doesn’t have the money to develop them yet. But he is sure that she could get some modeling jobs with those pictures in her portfolio – for sure.

Barbara finally made her way out of the building and proceeded toward the parking area. Jobs – how amazing would that be… She unlocked her car and seated herself inside. She pulled a little mirror out of her purse and looked in it. A small blotch of pink was spreading over her left eyebrow and she touched it repeatedly to assess just how bad it will be if the pimple actually shows itself. Great – that’s what she needed – and she is taking John for dinner tomorrow night. She wanted to look stunning for him. Just stunning.
Posted by Maja Djikic at 15:44
Labels: +Original Writing, Original Writing