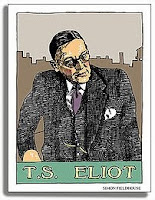 A previous post (click here) contained a discussion of some pilot research I did on T.S. Eliot’s Ash Wednesday inspired by the work of Reuven Tsur (2002) who argued that some poetic texts “don’t only have meanings or convey thoughts, but also display emotional qualities perceived by the reader” (p. 279).

In experiencing a meditative quality of a poem a reader may feel confusion or disturbance, but will not necessarily attain a state where meditation can be said to have taken place. I worked on devising a replicable framework for considering a text “meditative.” I synthesised Tsur and his co-researchers’ findings from 1974 to 2003 into a framework with five sub-groups, which identified features of a poem into categories such as “Phonological” and “Lexical.” The ensuing framework helped to examine stylistically part of Ash Wednesday, establishing where the stylistic features potentially weakened simple perceptual organisation of the text.

The four readers in my study were asked to read 19 lines of Section V of the poem, then think aloud about it, while what they said was recorded. The first four lines of what they read were these:


If the lost word is lost, if the spent word is spent
If the unheard, unspoken
Word is unspoken, unheard;
Still is the unspoken word, the Word unheard.

Rather than the summaries given in the previous post, I here give some direct quotations.

Reader A reported some awareness of heightened feeing: she indicated an emotive crescendo in the first stanza which she described as feeling “broadening sort of like frames of reference to world … so I’m thinking that it’s more, more general perhaps.” Later she modified this to indicate the highest feeling on line 7. The first stanza begins with “If the lost word is lost” and ends with “Word.” The repeated use of “word” supports the idea that the two ends of an emotive crescendo may be marked by similar elements.

Reader B remarked that the first stanza was difficult to understand initially: “The repetition of ‘word’ used so many times, I’m trying to distinguish which word, whose word, um … this is simply repetitions of words … but I’m not able to break [it] down … who’s saying what to whom about what really there, I need to keep reading verse one… it doesn’t seem to be the end of an idea … I haven’t got a finished idea.” Here the repetitions have caused confusion and seem to be working against the sense of stability or security. The reader reported she was feeling “agitated … because I can’t actually grasp it … it’s not making sense to me and therefore I’m having difficulty progressing to the next section.” Her think-aloud about this section hinged on the place where understanding clarified somewhat and she spoke of “some glimmer of understanding.”

Reader C reported confusion in comprehending the first six lines: “I hadn’t a clue what I was reading, or what it was about,” whereas Reader D tried out a variety of interpretations, then, towards the end of her protocol she, too, expressed some confusion about the first four lines which seemed to have deepened. She remarked that there were “uncertainties … it’s someone who’s in a turmoil … maybe that’s why I get the sense of sort of darkness … I do get the sense of nothingness.”

Readers reported heightened feelings of emotion and confusion that correlated with textual nexuses that I had determined from my analysis of stylistic features. In Section V of Ash Wednesday the emotions expressed were divergent: “calm,” “negativity,” “whirling into a void.” The sense that I gained from my pilot study was that the effort after meaning in reading this poem did not yield anything easy, but could induce, as Tsur proposes, an increased concentration, from which certain kinds of emotions could start to emerge not from meanings but from their absence. Is this, perhaps, an altered state of consciousness?