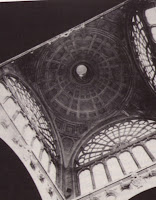 Antwerp is the diamond centre of the world and, indeed, in Antwerp Station, there are—a sign announces—40 jeweller's shops. At about 11.30 on a Tuesday morning earlier this month, I walked past these shops. Two or three looked as if they had closed for good, but the rest were open, their windows brightly over-lit. Each displayed tray upon tray of rings, bracelets, pendants, and other diamond encrusted objects. Many had signs saying that they had 50%-off sales. Each had a solitary person sitting behind the counter or in a couple of cases lounging about outside. And customers? I saw not a one.

I estimated five hundred or more items on display in each of the shop windows. Most had little tags bearing inscrutable codes, but some shops had prices: items marked as 299 Euros, 395 Euros, 545 Euros. I made calculations of the value of the stock. Within the station, near the diamond shops, was a police office. It looked deserted.

I know there's a recession. But how do the diamond businesses survive without customers? I asked this of a tough-looking man in black shirt and black trousers who was leaning against the door-jamb of one of the shops. "They do all right," he said. "Don't worry about it." My guidebook said that this was not even the centre of the diamond district. That was a street a few minutes away. I walked there. On the way I passed more diamond shops, dozens more, still no customers. At the entrance to the street to which I was headed were twin rows of stainless steel pillars which could be lowered flush with the street or raised 70 cm above street level, a serious impediment to a truck, perhaps even to a tank. In this sequestered precinct, there were no vulgar shops, but multi-storey office buildings, forbidding, anonymous. And there was another police station, this one more formidable, with actual policemen. But still not many people about.

I was staying over in Antwerp after a conference in the Netherlands at which (among other interesting meetings) I was thrilled to meet someone who had been a friend and colleague of the late W.G. Sebald who (to my mind and to the extent of my reading) is the greatest writer of the post-World War II years. It was only when I got home, and found out more about Antwerp, that I realized that the opening of Sebald's novel Austerlitz is set in Antwerp Station. I had remembered from the novel the opening scene in a station waiting room, but had not remembered where it was. It is in this station that the narrator first meets Jacques Austerlitz, whom he sees making notes and sketches of the station's architecture. The station was completed in 1905, a building of arresting extravagance with a huge entrance hall under a huge dome, and railway tracks that run out beneath a roof of roundish-gothic shape of iron girders and glass, towards which the smoke of steam-engines past could rise. The building is an eclectic combination of the Pantheon at Rome and a cathedral to modern travel. If only I had had the novel with me when I was there, I would have been able to notice more, because as Austerlitz explains to the narrator, the building was a logical approach to the new epoch, and:

... said Austerlitz, it was also appropriate ... that in Antwerp Station the elevated level from which the gods looked down on visitors to the Roman Pantheon should display, in hierarchical order, the deities of the nineteenth century—mining, industry, transport, trade, and capital. For halfway up the walls of the entrance hall, as I must have noticed, there were stone escutcheons bearing symbolic sheaves of corn, crossed hammers, winged wheels, and so on, with the heraldic motif of the beehive standing not, as one might at first think, for nature made serviceable to mankind, or even industrious labour as a social good, but symbolizing the principle of capital accumulation (pp. 11-12).

But what about the diamond shops—which I did notice—now at the beginning of the twenty-first century? Do merchants come by night, after clandestine journeys from Caracas or Dubai? Or is it that in the late afternoon, after work, couples come shyly to choose engagement rings? It's not that capital accumulation seems to have been flagging generally in Antwerp. The city has been prosperous since the Renaissance; its centre is magnificent and alive. My guide book says Antwerp is now the world's third largest port. From the window of my hotel near the station, looking south, I counted 14 cranes, a decent indication of economic activity. But what about those deserted diamond shops? It is one of those matters that someone who spends too much time thinking about books, and who is therefore insufficiently versed in matters commercial, cannot comprehend.

The picture at the head of this piece is from page 11 of Sebald's Austerlitz in which, as with his other books, Sebald has placed, every few pages within the text, diagrams and photographs of undisclosed provenance. I take this photograph to be a view upwards into the dome of Antwerp Station.
Posted by Keith Oatley at 07:26
Labels: +Original Writing, Novels, Original Writing