Film as an Art Form, by Thomas Scheff 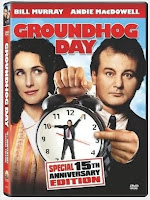 The film Groundhog day, written by Danny Rubin and Harold Ramis, and directed by Harold Ramis, is about Phil Connors (played by Bill Murray), a meteorologist for the weather program of a television station. Every year he has go with his producer, Rita (Andie MacDowell), to a small town in Pennsylvania called Punxsutawney to report on Groundhog Day, February 2. On this day, in this place, each year, a groundhog much beloved of the local population emerges from his home. If (according to Wikipedia), the groundhog "sees his shadow and returns to his hole, the whole of the United States will have six more weeks of winter. If [the groundhog] does not see his shadow, spring will arrive early."

Phil Connors hates the assignment, and thinks it ludicrous, but one year after reporting on the groundhog's emergence, there is a blizzard that forces him and the TV crew to stay another night in Punxsutawney. Next day Phil wakes up and finds himself living February 2 all over again: the same events, the same people, the same everything. It happens again the next day, and the next ... It looks as if Phil will keep reliving this day for ever. Although everyone he meets is experiencing the day for the first time, Phil knows he has been through it before. What would it be like if every day were the same? And what would it be like to be able to change some of the things one has done in one's life?

Each new viewing I stumble on new layers of meaning unnoticed earlier. My first impression was merely romantic comedy: boy gets girl. Next time I noticed that there was another layer on top of that one: a sly lesson in the meaning of romance. Most of the scenes were about wrong moves, but toward the end, Phil begins to wake up. A longer review, in which I discuss more layers, is in the Archives of Film Reviews (click here). This is an excellent film that gets four stars on a five-star rating.
Posted by Onfiction Contributor at 07:58
Labels: +Reviews, Art, Film

I feel as though I am living the same days over again now that I'm working on the rewrite of the novel I spent a year and a half writing. It's uncanny to see evidence of the person and writer I was back then when I study pages I left. And like Bill Murray, if I can just get it all right, I'll be able to get past the reruns.

Thank you very much Paul, for this witty connection. I find that one of the things that writing is about is the opportunity offered by the world on paper—but not the world of everyday happenings—to get it right the second time round, or perhaps the seventh, or the seventeenth.

I agree with Paul and Keith on this one. My own experience with rewrite is even more extreme. I have found that I have the urge to keep rewriting already published article snd books until I find out what it is that I was trying to say.

Feedback seems to be one of the keys. Just the right kind of praise or criticism seems to make the magic mark.