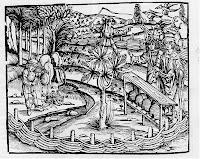 This week, we’ve been interviewing classics scholar Alexandra Garcia-Mata about psychology and fiction in Roman literature.

A: Right now, I’m reading Virgil’s Georgics, which is all about what farmers do. And while it was directed at an elite audience who probably owned farms but were not themselves behind the plow, the fiction that was maintained in the actual poem and for the poet's audience – because all poetry was read aloud – was that if you were a farmer, this is what you would do. It’s not clear to me why Virgil wrote this in the first place, but he did. And he talks about how much of life as a farmer relies on being attuned to nature, and he often warns about how you have to be aware of the right times in the year to do things, and watch the constellations, because the stars would tell you about the turning of the seasons. And so their psychology was very involved in the natural forces that ruled them. Of course, it’s idealized, but he does talk about how difficult it is and all the things that can go wrong: we were just reading today about the horrible storms that can take down your crops after you’ve put so much effort into sowing them, so maybe it’s not so idealized; he recognizes how precarious agricultural life is and how you’re at the mercy of natural forces that can be hostile.

R: Is it compelling because this is a foreign lifestyle for urban Romans?

A: It’s not so foreign, because for a Roman, even if you lived in the city, nonetheless you were supposed to identify with being a farmer, for example, to identify with the idea of Cincinnatus, who came to serve Rome but then returned to his farm.

V: It’s so hard not to see this through today’s romantic environmental ideas.

V: How much are they talking about these ideals more as they become aware that they're not practicing them?

A: It was one of these ideas: that you were a simple country man at heart, that the good Roman went back to his farm. Mostly it was: none of this high-falutin’ baloney in the city: you worked hard, you lived a good simple life,' it was very Puritanical, family values. We don’t know what the relation was between how they talked about this and how they lived, because by the time you have the literature that we have extant, these values were more praised in the breach: Cato would say, 'oh, you degenerate Romans'; already, at about 100 BC or so, it was already in the romanticized past. In a sense they didn’t really do this, live this life of virtue and simplicity, but in a sense they all knew they were supposed to (even as they weren’t). It was a funny dualistic world they lived in.

V: Not unlike ours.

R: So was this meant to remind them of this other side of their life?

A: And maybe to make them feel like yes, we really are good Italians, and we know our roots as good Italian farmers. And they would pretend they didn’t have farms that were entirely staffed by slaves. Because by then – this was in the empire of Augustus – there weren’t a lot of Roman farmers. They were all living the life of Reilly and their farms were being taken care of by slaves. There were still peasant free farmers, but these large farmers were what we would think of as industrial farmers. So this was really basically a romantic view of farming – there still were these farmers, but these elites were not them. This was very sophisticated poetry, directed at a small, elite, percentage of the population, and the actual farmers, who were very busy, wouldn’t have time for this stuff. In terms of the psychology of the country people, there’s a lot of discussion of the religious rites in the cycle of the agricultural year. In the springtime, people dancing – the rustic youth. This discussion of how people viewed the country life reminded me of some of the commentary on the Georgics about how the elites admired the religious impulses of the country people, but in a condescending way. They would kind of say, 'of course, we don’t believe in this, we don't have to carry on in this manner any longer, but it’s important that the country people have this.' This commentary is talking about a line that’s describing a springtime festival at which things have been planted and are growing: (I’m translating from the Latin) But as Servius says, 'it means a kind of dancing or leaping suitable to religion' – this is the action of country dancing at the festival 'not coming from any art or skill, but spontaneous leaping about without any choreography, which as evidence of rustic piety is a matter for praise rather than blame.'

This kind of summarizes what they’re feeling as they interpret: 'oh, isn’t it cute how the rustics act; we understand, but of course we’ve gone beyond that now; we’re too sophisticated for all that now.' They don’t explicitly talk about a different relationship with the gods for elites and rustics; it’s more what we have to infer. There’s a kind of phony 'we all do this, and we all join in, but of course, we’re not rustic ourselves, we just like to pretend or imagine that we are.'