Anniversary Narratives: The Blog and The Book 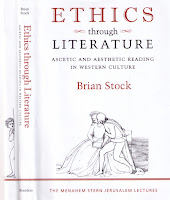 At the beginning of 2008, three of us (Maja Djikic, Raymond Mar, and I) were the surviving members of a writing group that had met for several years to discuss fiction, and research on fiction, and to give ourselves exercises in writing fiction—300 words or so—that we would then read to each other. Our group had been reduced by the move of Valentine Cadieux to Minneapolis, and the move of Rebecca Wells-Jopling to attend to the exigencies of having a new baby and finishing her PhD thesis. We started to talk about writing a blog. I had no real idea of what a blog was, but next day, I read in the newspaper that a singer whom I had heard the week before wrote a blog, so I looked it up. The singer had by then flown from Toronto to Europe for his next performances, and was in Vienna, I think. In his blog he described waking up in his hotel and wondering whether to have a croissant for breakfast.
I did some more extensive research, and took some advice, and the three of us discussed the idea some more. Raymond was already knowledgeable on the subject, and it was he who came up with the idea of calling our blog OnFiction. We have now run to 150 posts.

There are several features that I like about our blog, which distinguish it from most others. There is only rather a small amount about what we have for breakfast. Instead, the blog is something like a literary magazine. What we aim for is discussion that would be of interest to our readers that is lively but would not out of place in an academic journal, occasional pieces of our own creative writing, reports of research and, alongside our three-times-a-week posts, archives of articles and reviews. So, if you want a recommendation and a review of some films that combine fictional and psychological interest, you can go to our film section (click here). And if you want a list of books with micro-reviews, you can go to our section of Books on the Psychology of Fiction (click here). In our research we have not yet cracked the problem of which works of fiction have the most distinctive psychological effects, for instance of improving people's theories of mind, or enabling personal transformation, but we have made a start on the problem by nominating some works that seem, from their style and content, as if they might have particular kinds of effect (click here).

Most importantly, we have begun, along with colleagues to whose sites we give links, to work out what a psychology of fiction might be. It's a reunion, I think, of the literary and the psychological, a kind of recovery, perhaps, from the founding in the nineteenth century of separate university departments of literature and of psychology. An integration of literature and psychology was present at the beginning of both ancient Greek and ancient Indian traditions of poetics. It is seen again in European philology, for instance in the following by Erich Auerbach (1958) writing about his researches on medieval texts.

So, let me think back to posts that I have enjoyed. I've enjoyed nearly all of them, indeed members of my family sometimes ask me: "Are you blogging again?" So, I'll choose just one post. It's on reading books as means of self-improvement (click here) and it centres on a 2007 book, based on his Jerusalem Lectures, by my friend and colleague Brian Stock, one of those admirable scholars who (as Auerbach used to be) seems as conversant with medieval Latin, French, and Italian, as he is with his native language. Here's a quote from this post, in which I discuss Stock's book on two modes of reading that he calls ascetic (for self-improvement) and aesthetic (for pleasure). These modes are not mutually exclusive.

Stock shows that the tradition that developed with such readers and writers as Augustine, Petrarch, and Montaigne, was of ascetic reading in a way that one would enter a state of calmness with one's book, exclude the outside world and take in the words, and then a second phase of contemplation and reflection, to incorporate the meanings as parts of oneself. He points out, too, that this account parallels in many ways the practices of meditation in the East, which of course, also aim at self-improvement.

Erich Auerbach (1958). Literary language and its public in late Latin antiquity and in the middle ages. New York: Pantheon.