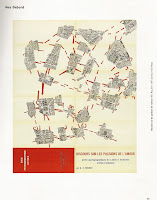 Authors of fiction may think of themselves as inventing places in their stories, but 'place,' as a concept, is something many people think of as given, not invented. Geographers and other theorists of place, however, think of place as a malleable medium, caught in a constant flux of desire and pragmatic action, and between the experiences and imagination of many different users.

Psychogeography turns specific attention to the experience of place, and people who practice psychogeography often work to disrupt the given nature of place experience. The dérive has been one of the most classic practices of psychogeography gatherings; associated with situationism, this form of place exploration has a wide following and some fascinating implications for thinking about fiction.

Literally a form of 'drifting' through space and place, Guy Debord described the dérive in the late 50s in his “Théorie de la dérive”:

One of the basic situationist practices is the dérive, a technique of rapid passage through varied ambiences. Dérives involve playful-constructive behavior and awareness of psychogeographical effects, and are thus quite different from the classic notions of journey or stroll.

In a dérive one or more persons during a certain period drop their relations, their work and leisure activities, and all their other usual motives for movement and action, and let themselves be drawn by the attractions of the terrain and the encounters they find there. Chance is a less important factor in this activity than one might think: from a dérive point of view cities have psychogeographical contours, with constant currents, fixed points and vortexes that strongly discourage entry into or exit from certain zones.

Individuals and groups embarking on this kind of exploration are encouraged to observe and respond to the possibilities and meanings that exist in the landscape -- indeed, noting one of the fundamental principles of landscape analysis, Debord cites Marx’s observation that “Men can see nothing around them that is not their own image; everything speaks to them of themselves. Their very landscape is alive.” The politics of this approach to landscape are a central part of its lasting appeal and currency -- who can go where in the landscape - and how and why - are all telling exhibitions of our social fabric. Psychogeography attracts people largely because of this promise of exploration (and attendant exercise) of agency in relation to place involved in this politics.

The lessons drawn from dérives enable us to draft the first surveys of the psychogeographical articulations of a modern city. Beyond the discovery of unities of ambience, of their main components and their spatial localization, one comes to perceive their principal axes of passage, their exits and their defenses. One arrives at the central hypothesis of the existence of psychogeographical pivotal points. One measures the distances that actually separate two regions of a city, distances that may have little relation with the physical distance between them. With the aid of old maps, aerial photographs and experimental dérives, one can draw up hitherto lacking maps of influences, maps whose inevitable imprecision at this early stage is no worse than that of the earliest navigational charts. The only difference is that it is no longer a matter of precisely delineating stable continents, but of changing architecture and urbanism.

Discovering this ability to engage places and to invent and re-invent settings has continued to attract people to psychogeographical writings and events. Although the way we invent places runs up against a myriad of immovable boundaries and forces beyond our power to change - or sometimes even understand, the engagement with place involved in this kind of exploration must have many of the same benefits that have been demonstrated in engagement with fictional characters and inventive future authoring. More on this in weeks to come.

Is the goal of the dérive to shake loose our preconcieved sense of space, and discover the place itself, or to look back and see patterns of space construction from a newly alienated vantage-point? Are we seeking a deeper understanding of the subject space by clearing away mental debris, or to understand better how that debris is constructed in the first place?