Travelogue Review: Under a Cloud 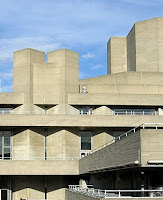 One can grumble about a lot of things in London—about the cloudy skies or about how expensive the Underground is—but something one cannot grumble about is the theatre. There are, of course, jokes: Decline the verb "to be interested in drama:" "I'm interested in drama, you are involved with the theatre, he's in show-business." Nonetheless, theatre is something the Brits do superbly well.

On London's South Bank there stands not only the Royal Festival Hall, opened in 1951, the first new large public building in London after the destructions of the War, but also the National Theatre, and the new Globe. Do not fret that the National Theatre building is a grey concrete thing of slabs and boxes. We don't have to compare it with Sydney Opera House or the Bilbao Guggenheim. It's what goes on inside that counts.

And it does count. It is hard to go to anything at the National Theatre that isn't good. Recently we saw Burnt by the Sun, a brilliant play, superbly acted, adapted by Peter Flannery from the screenplay by Nikita Mikhalov and Rustam Ibragimbekov of the excellent 1995 Russian film of the same name. It's about Sergei Kotov, a celebrated general in the Red Army, who has become a popular figure. (He is played in the National Theatre production by Ciarán Hinds.) The play takes place on a day in the summer of 1936, in the General's dacha (country house) by a lake a few miles outside Moscow. The General comes from a peasant family. He fought in the Russian Civil War after the Revolution, and he has a bluff and reassuring faith in the new society. He lives now with his wife Maroussia (played by Michelle Dockery) and his ten-year-old daughter Nadia (Skye Bennett/Holly Gibbs). Some of Maroussia's relatives are there too at the dacha. Do they live there, or are they just hanging around the spacious house? In any event, they dispose themselves in a beautifully Chekhovian way. One gathers that Maroussia's family were the previous owners of the dacha, and they talk about Pre-Revolutionary times.

The setting for the story is the beginning of Stalin's purges of senior officers from the Red Army. The action proper starts with the return, after many years, of Mitia (played by Rory Kinnear) who had grown up close to Maroussia's family. Kotof and Maroussia both recognize him immediately when they see him. There is a sudden tension. Why has he come?

It is very unusual to make a play out of a film. This adaptation for the stage involves a deeper exploration of the characters Kotov and Mitia, and one wonders how far it is theatre that has allowed this effect. At the same time there has been a change in atmosphere. The film is very Russian, but this very moving play—and perhaps this is part of how they can keep packing 900 people, night after night, into this theatre—seems, in its preoccupations, rather British. It is about the trustfulness of family life, despite its tensions, compared with a distrust of politics and the outside world. It is about the desire for society to be better for everyone while yearning nostalgically for privilege and the past (nostalgia being that sentiment in which things are not what they used to be, and never have been). These are ambivalences I feel myself, for a Britain from which I have emigrated and from which, when I return, I notice that hold myself emotionally at a certain distance.

The last performance will be at May 21

Thanks, Anonymous, for noticing my mistake in saying that the play runs until 21 April. I am very sorry, and I have now edited my text to give the correct date, which as you say is 21 May.