Travelogue Review: Shock of the New 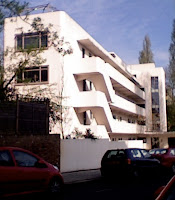 The 1920s and 1930s were a time of modernism not just in literature but in architecture. By the 1920s, modernism in architecture was established on the Continent of Europe. It came to London, and in Lawn Road, just around the corner from South End Green (where we are living) is the Isokon, one of London's earliest and most remarkable modernist buildings. Influenced by the Bauhaus, it was designed by the Canadian architect Wells Coates, and it opened in 1934. It is a block of flats (an apartment building) with four storeys of smooth white outline, with staircases at each end connected by balcony-like walk-ways. The flats did not at first have kitchens. instead, a dumb waiter (a little rope-operated elevator) communicated with the large kichen downstairs, from which flat-dwellers could order meals from the cook who worked there. Walter Gropius, head of the Bauhaus, came to live in the building when he was expelled from Germany by the Nazis. With the Blitz the attraction of living in a reinforced concrete building increased and the flats became hard to get. it was at this time that Agatha Christie lived here.
Further down Haverstock Hill, in Ferdinand Street, you can see what may be London's first Le Corbusier-style flats, designed by Cornell, Ward & Lucas and opened in 1935: the five-storey Kent House, with rather protruding balconies.

“The house is a machine for living in,” announced Le Corbusier (1923, p. 4). He founded the International Style of architecture. He was a persuasive writer, excited by cars and the functional lines of mass constructed skyscrapers. Here is what he wrote about his vision.

Suppose we are entering the city by way of the Great Park. Our fast car takes the special elevated motor track between the majestic skyscrapers: as we approach nearer, there is seen the repetition against the sky of the twenty-four skyscrapers; to our left and right on the outskirts of each particular area are the municipal and administrative public buildings; and enclosing the space are the museums and university buildings. (Le Corbusier, cit. Jacobs, 1961, p. 31).

Le Corbusier is the subject of an exhibition at London's Barbican Centre, which runs until 24 May. It's a fascinating display of his designs, paintings, sculptures, furniture, architectural models, photographs of buildings, and writings. He was full of ideas. His principal vision was for what he called Radiant City, in which people would live happily in bright apartments in tower blocks with easy access to open spaces. One can be very taken with these ideas. Some of Le Corbusier's early buildings were strikingly beautiful, and the impressive Barbican Centre itself clearly shows his influence.

In the Post-War period, Le Corbusier's Radiant City came into a certain kind of existence in Britain and America. In London, it was part of a compelling symbiosis with the rebuilding of bomb damage and slums, with the use of steel and concrete, and with the need to build cheaply and minimize ground-space. But as certain people, including Jane Jacobs (1961) and Alice Coleman (1985), began to realize, something went wrong. Art, in its architectural embodiment, here lost its individuality—high-rise blocks all looked the same—and it lost, too, its voluntariness because, as people were rehoused, although for the first time they had indoor plumbing, they had no alternative to the tower blocks.

Coleman (1985) studied Post-War public housing in and around London: 4099 blocks of council flats and 4172 council houses and converted houses. Coleman’s team used six unobtrusive measures of how well each building was working: (i) litter, including decaying and uncollected garbage, (ii) urine, (iii) faeces, (iv) graffiti, (v) damage by vandalism, (vi) the number of children who had been taken into care, i.e. removed from their families by social services because of parents’ inability to look after them. Coleman’s team correlated these measures of social disintegration with features of building design. They found that in London's public housing, Radiant City had been little short of a disaster. Houses were consistently better than blocks of flats on all measures of socio-emotional well-being. In houses: “Litter is less common, graffiti extremely rare, and excrement virtually unheard of. Vandal damage may occur where houses are adjacent to flats, but children are taken into care much less often” (pp. 170-171). The large size of blocks, anonymity, inability to look out onto the street from one's front door, dependence on vertical access routes, and other such features were correlated with signs of social breakdown. It is as if Le Corbusier were too successful, too influential. Coleman concluded that no more high rise apartment blocks should be built as public housing.

Some of the buildings of early modernism, such as the Isokon, grew from the Arts and Crafts movement. This movement was not based on the idea of people as cogs in machines for living, but on questions that included how to develop new kinds of furniture in coordination with new kinds of exterior. It was influenced by Art Nouveau, and in Glasgow was pioneered by Charles Rennie Mackintosh. As Mackintosh showed with the houses he designed (click here).there is nothing wrong with the functional lines of modernism. Smooth functionality arrived with the evolution of style. In the modern world, moreover, there seems to have been no escape from reinforced concrete. But it turned out that the house as an intimate space for people to live in is still quite a good idea.