Travelogue: Beneath the Surface 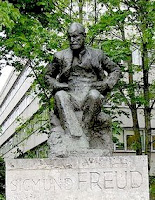 One of the deep ideas of fiction and of psychoanalysis is that however people may seem in the flesh, or indeed in photographs (such as the one of Salman Rushdie and Padma Lakshmi shown in Maja's post of 27 March), the face is not quite the place. The visible is too ambiguous; everything important goes on beneath the surface.

When I am in London, l like to walk around the streets as Virginia Woolf used to, and sometimes I do another of Virginia Woolf's exercises: I try to imagine what people are up to. Here in the area of South End Green, Belsize Park, and Swiss Cottage, in London's land of psychoanalysis, I imagine that the bald-headed chap over there is an analyst wondering whether he missed making an interpretation that would have been truly mutative. Coming towards me is a woman with hair like a lampshade; her intent look must mean that she is practicing evenly hovering attention. How does one recognize the analysts and therapists? It's difficult to say explicitly: a slight sense of other-worldliness, a certain ascetic quality.

Not only is the place populated by psychoanlysists present, but there are ghosts of psychoanalysts past. In Maresfield Gardens is the house where Sigmund Freud spent his final 15 months, and his daughter Anna lived for much of her life. (Anna Freud is the only person to have been analyzed by both the father of psychoanalysis and her own father.) In Wedderburn Road is the house where Anna Freud and Dorothy Burlingham opened their nursery to care for children whose parents had been killed in the Blitz. On the corner of Belsize Lane and Fitzjohn's Avenue, is the Tavistock Clinic (now the Tavistock Centre) where John Bowlby once had his office. His work on attachment took off from that of Anna Freud with orphaned children, and although sniffed at in orthodox psychoanalytic circles, it enabled the formation of important empirical bases for certain psychoanalytic ideas. In front of the Tavistock Centre there is a statue of Sigmund Freud, seated and staring balefully through a gap in the hedge at the Porshes, taxis, and white delivery vans, as they queue impatiently to get onto the Swiss Cottage one-way system. Round the corner, not far away, in Eton Avenue, is the house where Ronnie Laing lived. When I was in training to join the august company of therapists, I would go there for supervision and evening seminars.

The red-brick faces of the buildings of the psychoanalytic past look much the same as those of other Victorian houses in the area. But the spirit of psychoanalysis is pervasive. Because of it, I occasionally feel nervous with the idea that as an observer I might be observed, ashamed at having dealt insufficiently with my Oedipal conflict, guilty at unresolved transferences, anxious lest, in front of Marks and Spencer's, I might suddenly find myself acting out.

As I waited, unobtrusively, for a Number 46 bus, a friend came along. He is a well known therapist who works at the Tavistock Centre. We had barely greeted each other, when a red-headed woman came past and said "Hello" to my friend. "Do you know who that is?" said my friend, and mentioned the name of an eminent analyst. My errands were not pressing, so I went with my friend to the Hampstead Tea Rooms for an espresso macinato. We sat at a table outside, and my friend leaned over and said: "Do you see who's in there?" He flicked his eyes towards the interior of the tea shop. "No," I said. He told me the name, another very well known analyst. "Goodness," I said. "I didn't recognize him. He's put on an awful lot of weight."
Posted by Keith Oatley at 06:28
Labels: +Original Writing, Original Writing, Theory of mind

does this count as psychogeography?

Thank you, Scot in Exile ... I think that psychogeography is a good notion. And why not? Every London guide book lets us know where John Keats's house is.

a terrible attempt at a pun on part...! but i too think psychogeography can be a brilliant tool to understand the environment around us.