Framing Stories for the Imagination (3 of 3 posts on comics) 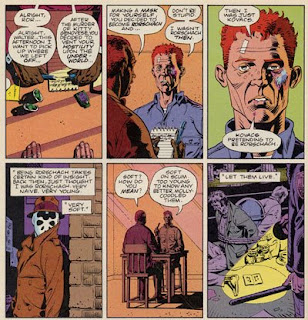 In his famous essay On Fairy-Stories, J. R. R. Tolkien discusses some of the features of speculative fiction. Although I haven’t read this essay in many years, two principles of the fairy story have stuck with me, and have repeatedly come to mind as I’ve thought about The Watchmen over the past two weeks. The first principle is that the alternate universe of the fairy story must be presented as true; although it presents marvels, within the frame of the story these marvels must be plausible and coherent. The second principle – one that often scowls demandingly over my shoulder as I write – is that the story must leave space for the reader’s imagination. If I write you a story, in other words, my story will be most effective if I frame the story in such a way as to invite you to contribute as many personally relevant details as possible to your simulation of the story.

(This is matter of much debate in the work of Tolkien himself, who provided so much detail that many people argue he left no leaf to the reader’s own imagination.) The way that stories are framed is obviously the central concern of the comic book. In my last two posts, I discussed the value of these frames for creating stories that re-frame, giving readers different perspectives on common issues (building on Scott McCloud’s recently posted TED lecture on comics) and for providing a rich visual template of place, space, and setting.

In this last post on The Watchmen, I consider a third perspective on frames, related to the way that frame shifts invite readers’ imaginations. The alternate universe of The Watchmen is painstakingly convincing – and the conversion from comic book to film emphasizes this reality in every possible detail. 1985 New York – costumed superheroes, moody ambiance and all – looks exactly as if you might imagine it in the throes of the Cold War had Nixon still been President. The conversion from comic to film may point, however, to some of the mechanisms by which we simulate stories, and in service of which comics work so well to prompt the imagination of readers. Part of what I was saying Friday about the richness of the portrayl of setting in comics has to do with the repeated appearance of layered motifs across the story frame of comics conveying what, in plain text, would require a daunting number of words. (This is why figures such as metonyms become so important!)

An interesting effect of the evocation of place and setting is that once a setting has been created, revisiting that setting becomes relatively easier. The author and reader have already put work into simulating this place, and coming back to it from other ‘places’ makes it more and more familiar and meaningful. (These transitions – like what McCloud calls the spaces between the frames – also contribute opportunities for the reader to insert personal associations.) This is obviously a significant strategy in a number of creative genres, and is a major staple of comics. In the scene from The Watchman pictured above, the main character, Rorschach, is undergoing a series of Rorschach tests. (And yes, I’m including this partly as a nod to psychology.) In the comic, this is a scene repeated over a series of days, with incremental changes in the scene (for example, more pills on the table for the psychologist, who is increasingly psyched-out by Rorshach).

The one scene translated from this series of scenes into the film exhibits the simultaneous condensation and elaboration required of the translation from comic to film. Despite the impressive attention to detail, as with several other such translations, the multiple iterations of a similar scene are condensed to a single scene that captures the essence of the interaction. And in spelling out the story in this condensation, much of the evocative invitation to imagine what happens between the frames is lost. Moore’s brilliant play of intertextuality still infuses the film (and is supplemented with additional filmic references) to good effect, but the palpable loss of imaginative space illustrates some of the recurring themes of narrative effect we’ve been exploring here (most recently discussed by Melanie Green’s post last week).

Adrian Veidt, justifying his perspective on the poverty of human problem-solving and imagination, quoted in Nova Express in book 11 of The Watchmen: ‘They want to be spared the responsibilities of maintaining that world, to be spared the effort of imagination needed to realize such a future.’