Writing The Case of Emily V. 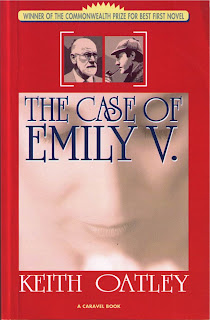 This Friday, and each Friday for the next few weeks, I shall offer some thoughts about how I wrote my first novel, The case of Emily V., which was published in 1993, and won the 1994 Commonwealth Writers Prize for Best First Novel. It has been translated into French, German, and Japanese, and in 2006 an American edition was published in New York, which you can buy direct from the publisher by clicking here or from Amazon by clicking here. Each week you can read two chapters of the first part of the novel in serialized form in our archive of Original Fiction, which you can access by clicking here.

The case of Emily V. is about Sherlock Holmes and Sigmund Freud, and how they came to investigate the same case: that of Emily Vincent, who may have pushed her guardian, Mr S., a member of the British Diplomatic Service, off a mountain crag in the Austrian Alps in 1904. Some years earlier, Mr S. seems to have seduced Emily when she was in his care, when she was only 14.

The novel is in three voices: that of Holmes's biographer, Dr Watson, that of Sigmund Freud, and that of Emily herself. It is not a whodunnit. It is, perhaps, a why-she-done-it, or a whether-she-done-it. It is focused on three pairs of characters: two males (Holmes and Watson), two females (Emily and her friend Sara), and a male-and-female (Freud and Emily). In each pair there are sexual currents, but in only one pair does does actual sex occur.

The novel, as I see it, is about the search for truth. The truth about the outer world, and the evidence that we need to understand it, is represented by Holmes and the kind of investigation he conducts. The truth about the inner world also requires evidence, but of a rather different kind. In the novel, the search for inner truth is represented in Emily's psychoanalytic therapy with Freud, and in her own search to understand herself.

I was prompted to write The case of Emily V. when I read a pamphlet by one Michael Shepherd, a professor of epidemiological psychiatry. In this pamphlet, Sherlock Holmes and the case of Dr Freud (1985), Shepherd writes about the parallel between the investigative methods of Holmes and Freud.

Shepherd's starting point was Nicholas Meyer's The seven-per-cent solution, and he discusses, too, the paper by David Musto, published on the First of April 1968, which was the starting point for Meyer's novel. In his paper, Musto speculated that when Holmes disappeared after confronting the dastardly Professor Moriarty at the Reichenbach Falls, he went secretly to Vienna to undertake treatment by Freud for his cocaine addiction.

Shepherd asks: Can one imagine a meeting between Freud and Sherlock Holmes? His conclusion is that we don't have to imagine it: these two meet every day on the shelves of detective fiction.

I was so irritated by Shepherd's condescending attitude to both fiction and psychoanalysis, that I read Meyer's novel and Musto's paper, and I thought perhaps that there were opportunities still for Holmes and Freud to meet: perhaps they could work on the same case, respectively trying to approach outward and inward truth. The case of Emily V. was the result.