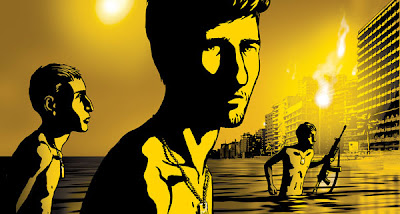 In studying the psychology of fiction, it is worth keeping in mind that fiction itself is a study of psychology. Psychologists and creators of narrative fiction are close kin: both are devoted to a greater understanding of the human condition, human psychology, and human behaviors. The Toronto International Film Festival provides a wonderful opportunity to explore this fact. We will be reviewing films of psychological import from the festival over the next couple of weeks. The first, Waltz with Bashir, deals explicitly with the vagaries of human memory. Written, produced and directed by Ari Folman, this film documents Folman’s struggle to recall his own experiences as a teenage soldier during Israel’s 1982 invasion of Lebanon. A friend’s confession of a recurring nightmare sprung from these times leads Folman to realize that he has absolutely no recollection of what must have been a very emotional and disturbing period of his life. He knows, factually, that he must have been present during the massacre at the Sabra and Shatila refugee camps, but finds that he cannot remember anything regarding these events. This distinction between remembering and knowing the past has become a foundational concept in memory research, with “know” judgments reflecting an awareness of a past event that lacks the rich experiential information accompanying the remembering of an event (Tulving, 1985). Folman embarks on a journey to repair and reconstruct his memory of this time, visiting psychologists and tracking down fellow soldiers who must have been with him at the time to probe their recollections. The film deals explicitly with how memories change, are suppressed, and at times even fabricated, while also touching upon the issue of post-traumatic stress disorder (van der Kolk & Fisler, 1995). Waltz with Bashir is unique from the perspective of psychological science, as it includes explicit discussion of research on false memories (Garry & Gerrie, 2005); combined with the fact that this film raises so many issues related to memory, Waltz with Bashir would make an excellent pedagogical tool. Folman chose to create this film using animation, and the choice works brilliantly. The dream-like quality of our memories is accurately captured by the technique, and the method also serves to both buffer the audience from some of the horrors being portrayed while simultaneously accurately and creatively communicating the senseless aspects of armed conflict. These visuals are paired with a fantastic score composed by Max Richter, the composer whom Folman was listening to as he wrote the screenplay. In a rare turn, the score was completed before the animation, so the animators were able to compose the picture while listening to the final score. As a result the two are so well married that one wishes more films could be created this way. Waltz with Bashir is a truly outstanding film, and it is highly recommended. Sony Pictures Classics has picked up this film for distribution in the United States, and Seville Pictures will be responsible for distribution in Canada, so expect a North American domestic release at some point in the near future. The trailer appears below.