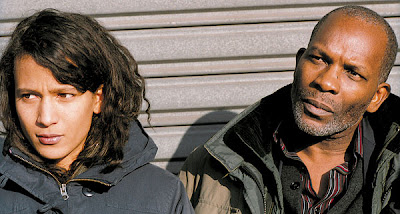 We recently reviewed a film from the Toronto International Film Festival that provided an intriguing exploration of human memory. This review is devoted to a film that explores another aspect of human psychology: the emotions. 35 Rhums (35 shots) by the French director Claire Denis certainly falls within this category. Denis has always excelled at complex emotional portraits, never simplifying or trivializing an observation. In a previous film (Beau Travail, 1999), for example, the homoerotic undertone of French legionnaires training in the desert is never equated with homosexuality—the cheap comparison sagely avoided. In 35 Rhums, we find a profoundly delicate portrait of the love that obtains between a daughter and her father, both living with the loss of the same woman; for one a deceased mother and the other a wife. Children who grow up in single parent homes often form a very different sort of relationship with their parent, something closer to a friendship than a normal parent-child relationship. This profound intimacy in the context of deep love can create a dependency that pulls against a competing desire to see the other person grow and develop as an individual. Both the father and the daughter in 35 Rhums wish for the other to find new love, to move beyond the cozy life they provide for one another, but simultaneously fear that this would mean losing what they have. Exposition cannot accurately convey the trembling nature of this dynamic, it is a place for poets. “If the cinema can be divided between its storytellers and its poets, Claire Denis unquestionably falls into the latter category,” writes Piers Handling, co-director of the festival. I would have to agree. 35 Rhums portrays the emotional tensions inherent in this form of relationship with profoundly subtle images. Her pacing of events will strike the average North American viewer as disturbingly slow, but after we have adjusted to this dolorous rhythm, comfortably cradled by its gentle rocking, events of emotional import arrive close on the heels of one another until we are almost overwhelmed. This is a gorgeous film, and hopefully more people will have an opportunity to see it. Currently, there is no North American distributor attached to this film, but copies are likely to be found in your local art-house movie rental shop within the year.
Posted by Raymond A. Mar at 10:32
Labels: Emotion, Film